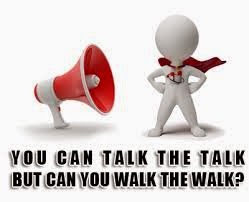 Walk the Walk!
by Steve Fair

The Oklahoma state Board of Equalization is composed of six Oklahoma statewide elected officials and one appointee.  The Governor chairs the Board and the rest of the board include the Lt. Governor, the State Auditor, State Treasurer, Attorney General, Superintendent of Public Instruction, and the Secretary of Agriculture (the appointee).  The Board is responsible for certifying the amount of money the state legislature will have available for appropriation in the coming fiscal year.   The projected revenue for FY 2016 is expected to be $60.7 million more than FY 2014.  Because of the increase in revenue a provision of SB #1246 was triggered which reduced the top rate of the state income tax from 5.25% to 5%.
All seven Equalization Board members agreed the revenue requirements of SB #1246 had been satisfied, but not all board members believe the automatic trigger mechanism regarding the income tax put in place by the Oklahoma Legislature in 2011 was a good idea. State Treasurer Ken Miller said, “My vote was in no way an endorsement of the policy.  As I cautioned before the bill’s passage, tax triggers are illogical from an economic perspective. I can think of no financial reason to pass a measure predicated on future revenue growth when policymakers could simply have waited to preserve flexibility for challenges — like the $300 million budget hole announced today.”
The board approved an estimate of $6,914,776,463 in available revenue for the FY 2016.  That is $298.1 million, or 4.1 percent, less than the legislatively-approved FY 15 appropriated state budget of $7,212,855,361.  State Auditor Gary Jones, while voting for the motion to approve said, “I think in the future we ought to be dealing with actual numbers rather than estimated numbers from the past. It wasn’t necessary to make this decision now if the Legislature had given us the maximum amount of time to make that decision.”
The Oklahoma State Constitution requires the board to meet again in late February to make a second estimate that will be used in negotiations between the governor and legislators to determine FY 16 appropriations levels for state agencies.  Unless the price of a barrel of oil increases, it appears FY 2015 will be a down budget year for Oklahoma government.
According to Preston Doerflinger, Secretary of Finance, Administration and Information Technology, the February certification is more relevant than the December estimate.  “If oil prices continue sliding and the energy sector shrinks, there may be less revenue in February than there is today – we’ll see. In any event, the challenge is not insurmountable and we can and will manage it,” Doerflinger said.  The governor says the current budget process in Oklahoma takes too much revenue out of the picture and significantly reduces the amount of money the legislature has to appropriate each year.  “It leaves very little wiggle room for us to be able to prioritize where our money’s going to go, especially as needs in the state change. That’s not a good way to budget. It doesn’t give us the flexibility that we need. That’s why we saw a little bit of a revenue shortfall last year, because all of the money was already allocated to other spending priorities,” Governor Fallin said.
State Auditor and Inspector Gary Jones said he is going to encourage the State Senate to require state agencies to prepare a ‘needs based’ budget.  “Needs based budgeting is a modified version of zero-based budgeting.  It requires budget requests be based on what you need and requires the agency look at all revenue sources before you ask for an appropriation, including what you have in a reserve fund.  In many cases, they’re getting more revenue than they’re spending and they continue to build this (reserves) up,” Jones said.
Jones believes the current budget process is shortsighted and doesn’t take into account the volatile nature of the revenue stream. “We don’t have any long-range plans on budget projections,” he said. “We’re always looking at just the next year. We’ve got to start looking longer than that, because you look at the peaks and valleys.”
If the 2015 Oklahoma state legislature has four percent less revenue to appropriate this year to state agencies, that presents a real opportunity for self-described fiscal conservative lawmakers.  Oklahoma government is ripe to be right-sized, just like in the campaign literature.  Instead of simply enacting one size fits all/across the board cuts as they have done in the past, legislative leaders should take Jones’ advice and require state agencies to justify every penny they request in their FY 2015 budget.  Stockpiles of reserve funds sitting in agency accounts should be publicly disclosed and considered before another nickel of tax dollars are given to an agency.  GOP leaders- time to walk the walk, not just talk the talk.

Posted by Steve Fair is a Jelly Salesman. at 7:48 PM

Good points Steve. I have had legislators tell me it is easier to make good decisions if they are forced to think of alternatives problems rather than just smoothing it over with more money.
Allie Burgin