Pruitt's political future yet to be determined! 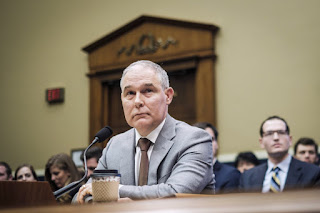 POLICY WAS PRUITT’S DEMISE!
by Steve Fair
When EPA Administer Scott Pruitt resigned last week, he cited the ‘unrelenting attacks’ on himself and his family as the reason.  The attacks were coming from the liberal left and they were brutal.  Pruitt was pushed out of the position because of the Trump administration’s environmental policies.  While Democrats might claim they were outraged by Pruitt flying first class, handing out raises to his staff, building a secure phone booth at the agency, and trying to buy a used mattress, that was a smoke screen.  Pruitt’s effectiveness at undoing the crippling regulations on the fossil fuel industry implemented under the Obama administration was the real reason for his resignation.  Three observations on Scott Pruitt’s resignation:


First, conservatives can be fickle.  As Pruitt faced more and more ethics investigations in DC, his supporters began to abandon him.  Make no mistake, there is no excuse for misbehavior, but many Congressional Republicans and the POTUS abandoned Pruitt because it became politically expedient.  Liberals won because conservatives wouldn’t ignore the noise and stick together.  As Pruitt’s issues played out in the media, his position became untenable, not because of the Ds, but because of the Rs.  Pruitt likely should have been investigated.  People in positions of power should be accountable, but he should have counted on conservatives to not fold under public pressure and to play out the hand.


Second, Pruitt should have anticipated the scrutiny.  The EPA, under Republican and Democrat presidents, has been an agency whose regulations have hurt the U.S. economy more than any other government agency.  While Oklahoma’s attorney general Pruitt sued the EPA a number of times.  After appointment as EPA administer, he immediately reigned in the agency’s overreach, which outraged the left.  Pruitt should have known the left would try to find anything they could to under mind him.  His primary mistake was thinking the left played fair and that the right had his back.  Did Scott Pruitt make mistakes in judgment?  Sure, but who doesn’t.  Were his mistakes exaggerated, caricatured and blown out of proportion by the media?  Absolutely!   Pruitt should have expected it.  What he shouldn’t have expected was conservatives abandoning him.


Third, Pruitt’s political future is yet to be determined.  Some so-called political experts say he has no political future- others say he does.  Fact is, no one knows, but Scott Pruitt, the voters, and God, not necessarily in that order.  But if Scott Pruitt’s political future hinges solely on what happened during his tenure at the EPA, his accomplishments far overshadow his poor judgment.  If voters will think in a rational and not emotional way in the voting booth, Pruitt will be just fine.  Pruitt did an outstanding job at implementing Trump’s de-regulation policy.  Those actions positively impacted the economy.  Pruitt’s challenge will be explaining in a 30 second TV spot or on a push card how his problems at EPA were solely over policy.


Of all members of President Trump’s cabinet, none reversed previous administration policy like Scott Pruitt.  The EPA’s overreach was being reigned in under his leadership.  Regulations that crippled industries, cost American jobs, and forced Americans to pay higher fuel costs, were dialed back.  The left couldn’t have that and Pruitt gave them enough ammunition to force him out with the right’s help.

Thanks Mike. I appreciate you reading.