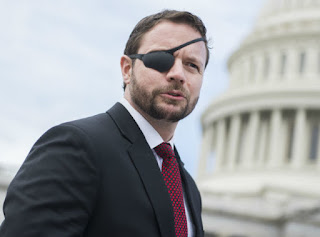 If you follow politics lately it has been about the extremes.  Rep. Alexandria Ocasio-Cortez, (D-NY), is a vocal liberal socialist.  Rep.  Justin Amash, (R-Michigan), Chairman of the Liberty caucus, is a staunch conservative, who doesn’t believe President Trump is conservative enough and has said he may run against him in the 2020 primary or leave the Republican Party and run as a libertarian.  There are twelve announced candidates for the 2020 Democrat nomination with at least six more considering the race.   A major issue is that both major Parties are struggling to find their identity.  The extreme wings in both Parties are a minority in registration, but vocal and involved at the grassroots level.  The extremes often win primaries because they outwork the more moderate candidate.  Their supporters and volunteers have passion and energy and that often overcomes weak fundraising.
Who is the future for the GOP?  One rising star is former Navy Seal Rep. Dan Crenshaw, (R-Texas).  Crenshaw lost his eye when an IED exploded in Afghanistan.  He earned two Bronze Star Medals, the Purple Heart, and the Navy Commendation Medal.  He wears a patch over his right eye.  After leaving military service, Crenshaw worked for Rep. Pete Sessions, (R-Texas) before he ran for Congress last year.  He won a contentious nine candidate primary and runoff.  Pete Davidson, a Saturday Night Live comedian, joked about Crenshaw’s patch on the November 3rd episode.  Davidson was widely criticized for his remarks and he and Crenshaw appeared on the air together the next week where Davidson apologized for his remarks.  Some believe that may be what pushed Crenshaw across the finish line in the general election.
Crenshaw has been critical of President Trump’s proposed ban of all Muslims entering the U.S. and wrote in a Facebook post in 2015 that ‘Trump’s insane rhetoric is hateful.’  He also believes that illegal immigration from Mexico and Central American can only be stopped by helping those countries’ economies.  Crenshaw wrote an op/ed that disagreed with Trump’s removing of troops from Syria.  But he supports building a border wall and Trump’s support of the Venezuelan people.  He also supports Trump’s declaration of a national emergency on immigration.  While some of Crenshaw’s policy positions are not as conservative as the Party platform, they seemed to have worked with the younger voters in his district.  He outpolled Ted Cruz by twelve points among younger voters in his race.
Last week, at the Conservative Political Action Conference outsider D.C., Crenshaw  spoke about inspiring Americans to embrace conservative values, personal responsibility, and limited government over a culture of outrage.  “A society full of people who are easily enraged by every tweet they see, or some news story that comes out- those who are susceptible to outrage culture, and ready to be offended isn’t a sustainable society. It’s a society at each other’s throats,” Crenshaw said.  In a culture of extremes, Crenshaw preaches decorum.  He appeals to the young voter because he’s stylish and to the mature voter because he is substantive.    While he may not challenge President Trump in the 2020 primary, Crenshaw has a bright future in GOP politics.  He appears to have the right temperament and uses critical thinking to evaluate policy- refreshing in today’s extreme environment.
Posted by Steve Fair is a Jelly Salesman. at 12:33 PM