REMEMBER GOD IS IN CONTROL OF THIS OLD WORLD! 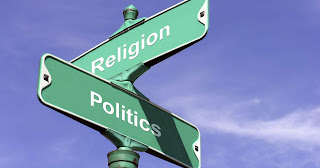 THE REASON FOR THE SEASON
by Steve Fair

The Christmas season is one where families gather to celebrate.  Often the subject of politics and religion will come up and as Mark Twain said, “I am quite sure that often, very often, in matters concerning religion and politics a man’s reasoning powers are not above the monkey’s.”  Twain’s point is that people tend to put rational thinking aside when it comes to religion and politics, but is that true?


Religion is defined as a particular system of faith and worship or a pursuit or interest to which someone ascribes supreme importance.  In other words, a person can worship a pursuit or an interest and not a deity.  Religion is not confined to a church or a people who recognize a sovereign Creator, who rules in the affairs of men.  There are lots of religious people in America today:  those who worship the environment, those who worship individualism, those who worship secularism and the list goes on and on.  Paul addressed those religious types in Athens in Acts 17 when he told them he was going to tell them about “the unknown God.”  He called them superstitious.  When a person is superstitious they have a meaningless, ungrounded faith in something.  In that particular case, those religious people were irrational and did not exercise good reasoning skills.  But is that always the case?


Religion and politics will always come up at the dinner table, because those are the two areas that most closely define who we are.  Avoiding the two subjects means we are putting on a false front for the sake of unity (not necessarily a bad thing).  Remember these two important principles when discussing religion and politics.


First, rational people can disagree.  There are times to drop a subject and agree to disagree.  To remain contentious to win an argument is not the way to win friends and influence people.  Thoughtful debate is a good thing, but caricaturing another person’s position to make a point is disingenuous.  Civil debate is a lost art form and insulting your opponent has become the norm.  People don’t care how much you know till they know how much you care.


Second, in politics, this too shall pass.  Politicos are always exaggerating the importance of a bill or an election as the last major hope for mankind.  Supporters of candidates claim that if their candidate is not elected or the president isn’t impeached, it will be the end of civilization as we know it.  That is plain hypebole- it’s embellishment.   God is in charge- not man and while He uses human instrumentality, to place so much importance on temporal events is secular humanism.
Third, remember the reason for the season.  This is the time of year when we celebrate the incarnation of the Son of God, who came to give His life for those who will come to Him in repentance and faith.  He is not a babe in a manager, but a risen Savior.  He can change this old world in the blink of an eye and Christians should be praying He will.  Have a Merry Christmas and a Happy New Year!

Posted by Steve Fair is a Jelly Salesman. at 9:06 AM