WALK THE WALK, NOT JUST TALK THE TALK! 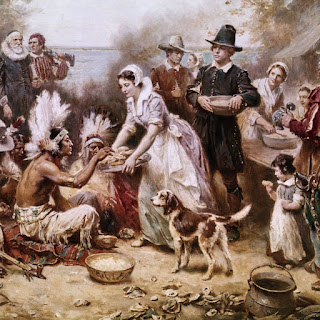 AMERICANS HAVE MUCH TO BE THANKFUL FOR!

What is known about the first Thanksgiving comes from a letter written by Edward Winslow in 1621,  Winslow was one of the one hundred people who sailed from England on the Mayflower the year before.  The first Thanksgiving wasn’t in November, but was in September and most of those who attended were men.  Many of the women had died after reaching the New World.  The 50 colonists and 100 natives were celebrating a successful harvest.

Magazine editor Sarah Hale was the driving force in getting the 4th Thursday of November declared Thanksgiving Day.  She achieved that goal in 1863 when President Abraham Lincoln signed a proclamation establishing that day as a National Holiday.  The holiday was used to heal a divided nation.

2020 has been a difficult year.  The COVID-19 pandemic, contentious politics, economic chaos, and hurricanes have made some believe we have little to be thankful for.  Four reasons for Americans to be thankful this Thanksgiving season:

First, Americans enjoy the most freedom on earth.  Clearly individual liberty is eroding in the United States.  Government interference, regulation, and mandates are on the rise.  The founding document is ignored and misrepresented, but in spite of all that, America is still the country people are trying to get to, not leave.  That freedom and liberty comes from the hand of a sovereign God and we should recognize that.  We should be thankful for living in America.

Second, Americans should be thankful for their system of government.  Many are unhappy with the recent election results.  Some are elated.  All should applaud the wisdom of our founders in establishing a system of government that allows citizens to change direction every two years.  If elected representatives don’t vote like their constituents want, they can be voted out.  America’s unique system of checks and balances in government work when citizens stay informed, engaged and involved in their government.  The system works only when citizens are diligent and faithful to holding their elected representatives accountable.

Third, Americans should be thankful for the first amendment to the U.S. Constitution.  It guarantees freedom of speech, worship and the press.  It also protects the right to peaceful protest and to petition the government.  Many countries, including democracies, do not have a founding document granting rights such as these to their citizens.  Few like protesters who disagree with their position, but all should fight for their right to exercise their first amendment rights.  When the liberties of one are infringed upon, it affects all.  The first amendment is under attack and it is critical it is protected.

Fourth, Americans should be thankful for their economic system.  The ‘American Dream’ can become reality in the U.S.  That is why people are trying to come to America.  There is no place on earth where a person can ‘pull themselves up by their bootstraps,’ like America.  In spite of growing government regulations, America is still the best place on the planet to get ahead economically.

President Theodore Roosevelt said about Thanksgiving: “Let us remember that, as much has been given us, much will be expected from us, and that true homage comes from the heart as well as from the lips, and shows itself in deeds.”  In the coming year, may the walk match the talk.