Dobbs vs. Jackson Women's Health to be heard by SCOTUS! 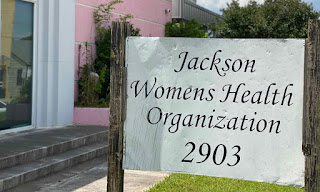 The U.S. Supreme Court (SCOTUS) has announced they will hear Dobbs vs. Jackson Women’s Health in the Fall of 2021.  The case involves a 15-week abortion ban law passed by Mississippi in 2018.  The Oklahoma legislature passed a similar law this year and it was signed into law by Governor Stitt.  There are 1,200 abortion restriction laws across the U.S.

The state of Mississippi lost their case in the fifth circuit appeals court and appealed to the high court.   This will be the first major SCOTUS abortion case since Justice Amy Coney Barrett joined the court.  Three observations:

First, if this case is decided for the state of Mississippi, it could potentially unravel Roe vs. Wade.  In 1992, the SCOTUS upheld Roe vs. Wade in a lawsuit involving Planned Parenthood.  In that ruling, the court said restrictions on abortion could not pose an undue burden on someone seeking an abortion. The expectation is the interpretation of what constitutes an ‘undue burden’ will be the central issue in the case.

Second, the pro-abortion advocates are worried.  Their argument is restrictions on abortions before the baby is able to live outside the womb are unconstitutional.  Their biggest fear is the SCOTUS uphold the 15 week abortion ban and then rules the abortion issue is up to each individual state.  They want the court to side with the appeals court and strike down the Mississippi law and also reaffirm the Planned Parenthood ruling.  That scenario is not likely considering the current makeup of the court.

Third, Democrats want to expand abortion and have the American taxpayer pay for it.  Last week, the 45 year old Hyde Amendment, which prohibited tax dollars to be used for abortions, was removed from the federal budget by the House Appropriations Committee.  The vote was 32-27 along Party lines.  Congressman Tom Cole, (R-Moore) is a member of the committee.  Cole said this: “This bill goes even further than just forcing American taxpayers to foot the bill for abortion on demand. This bill also deletes conscience protection language added 16 years ago by then-Congressman Dave Weldon. That language protects American doctors, nurses and other health care professionals from participating in or providing an abortion if they have a moral objection. This is an essential right of every American and its removal is a danger to us all.” If the Hyde amendment is not restored to the federal budget, then American taxpayers will be footing the bills for abortions.  The 2022 budget bill now goes to the full House for a vote.

Democrats are using the abortion issue to ‘fire up their base’ for the mid-term elections.  They know elections have consequences and the only way to keep abortion on the books is to get more pro-abortion candidates elected.  If the SCOTUS rules for the unborn in the Dobbs case, then expect Democrats to redouble their efforts.

Posted by Steve Fair is a Jelly Salesman. at 8:24 PM