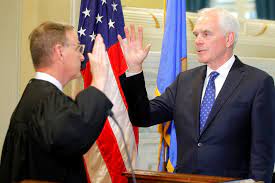 On Friday, Governor Kevin Stitt appointed Tulsa attorney John O’Connor, 66, to be the Sooner state’s Attorney General (AG).  O’Connor will complete the unexpired term of Mike Hunter, who resigned in May.  O’Connor and Stitt have a history, having known each other for over twenty years.  Stitt says he considers O’Connor a ‘mentor.’  The appointment follows the pattern by the governor of surrounding himself with people who he has a history with.

O’Connor was nominated two years ago by President Donald Trump to serve as a federal district judge.  The American Bar Association’s (ABA) 15-member judicial review board voted unanimously that O’Connor was “not qualified,’ to serve as a federal judge.  O’Connor withdrew his name from consideration before the U.S. Senate took up the nomination.  The ABA has a history of opposing conservative judges, cited O’Connor’s lack of actual courtroom experience as one of the reasons they opposed his appointment to the federal bench.  Three observations:

First, was O’Connor the best qualified candidate for the AG position?  According to the governor, he interviewed twelve (12) people for the position.  Sources claim many of those interviewed had more courtroom and law enforcement experience than O’Connor.  It appears the governor’s pattern of appointing friends and acquaintances to key advisory positions continues.  No one person has a history with and knows the most qualitied person for every position in government.  By appointing someone he has known two decades, Stitt makes it appears this appointment is a case of ‘not what you know, but who you know.’  The appointment is the sovereign decision of the governor, as laid out in the state constitution, but it is questionable the most qualified candidate got the job.

Second, the ABA assessment of O’Connor being ‘not qualified’ means nothing.  The organization trashes conservatives and have totally lost their objectivity. They attempted to block dozens of Trump appointments to the bench, not because they weren’t qualified, but because they disagreed with the appointee’s ideology.  Their observation of the lack of courtroom experience is of concern.  The AG is Oklahoma’s attorney and the state’s top law enforcement officer.  A corporate lawyer may not have to background to understand what the state’s District Attorneys and other law enforcers challenges are.

Third, Oklahoma voters will ultimately determine if Stitt made the right choice.  The AG position is up for election in 2022.  O’Connor announced at his first news conference he plans to run for the Republican nomination next year.  He has already drawn a primary opponent, Tulsa attorney Gentner Drummond.  Drummond lost the GOP primary by less than 300 votes to Hunter in 2018.    Others are sure to join the AG race.  Voters should watch closely what O’Connor does in the next sixteen months and vote accordingly.

The Oklahoma Attorney General manages a staff of 100 lawyers, and a total staff of 174 people, with an annual budget of $25 million dollars.  An argument could be made the Oklahoma AG is more powerful than Oklahoma’s weak governorship.  It’s a big job.   With the McGirt decision and the pending Dobbs pro-life suit before the SCOTUS, which could throw abortion back to the states, Oklahoma’s AG position becomes even more important.  Stitt stated in a press release that he appointed O’Connor because he was not just competent in the law but he also has high moral character.  Time and the voters will determine if Stitt made the right decision.

Posted by Steve Fair is a Jelly Salesman. at 9:00 PM