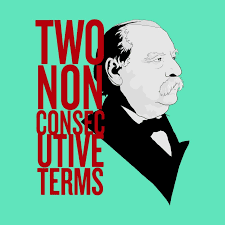 President Grover Cleveland was the first Democrat president elected after the Civil War.  He served two non-consecutive terms- the only president to do so in American history.  Cleveland was elected in 1884 as the 22nd president.  He was defeated in 1888 by Republican Benjamin Harrison, after losing his home state of New York.   in 1888, they met again, with Cleveland winning what historians say was the ‘cleanest, quietest and most creditable in the memory of the post-civil war.’  President Harrison’s wife was dying of tuberculosis and he did not personally campaign at all.  His wife died two weeks before the election and by that time both candidates had stopped campaigning.

Four other times in our nation’s history, former presidents have sought to win back the White House.  In 1840, Martin Van Buren lost his bid for reelection and then ran again for the Democratic nomination in 1844 and 1848, losing both times.  In 1850, Millard Fillmore became president when Zachary Taylor died in office.  He didn’t get the Whig party nomination in 1852, but did in 1856 and got just eight electoral votes.  Ulysses S. Grant wanted to run for a third term in 1876, but was persuaded to not run by Republican Party leaders.  Grant sought the GOP nomination in 1880, but was defeated by James Garfield.  Teddy Roosevelt became president in 1901, when William McKinley was assassinated.  He won in 1904 and then declined to run in 1908, instead endorsing William Howard Taft.  He became upset with Taft and challenged him for the GOP nomination in 1912.  After losing to Taft, Teddy ran as an Independent under the Bull Moose Party banner.  Teddy spilt the vote and Taft finished third and Democrat Woodrow Wilson won.

Although nothing in the original U.S. Constitution limited presidents to two terms, George Washington declined to seek a third term and suggested two terms of four years were enough for any president.  That became the unwritten rule for presidents until 1940, when Franklin Roosevelt won his third term and then won a fourth term in 1944.  He died just months into his fourth term.  In 1947, Congress passed the 22nd amendment, which limits the POTUS to two terms.  It was ratified by the states on February 27, 1951.

Former President Donald Trump appears to be a 2024 presidential candidate.  His speech at the CPAC convention in Dallas was vintage Trump.  It resulted in Trump winning the ‘straw poll’ for 2024 potential GOP candidates by a wide margin.  Three observations:

First, Trump is a known commodity.  That means he has a strong base of support, but he also faces strong opposition in his own Party.  One of the keys to winning a general election is to get those who supported another candidate in the primary to support you in the general election.  Trump polarizing personality could make that challenging.  Most anti-Trumpers in the GOP wouldn’t vote for a Democrat, but they can stay home.

Second, the swing vote is the key.  Trump won in 2016 because he appealed to organized labor with his ‘America First’ theme.  In 2020, he didn’t do as well with that group.  They didn’t turn out in the numbers necessary to push him over the top.  Part of that was due to the slow down of the economy due to the pandemic, but many felt like the return of manufacturing to the U.S. Trump had promised was too slow.

Third, if Trump loses the nomination and then runs on a third-Party ticket,  the Democrat will be elected.  President Teddy Roosevelt is an excellent example.  Ross Perot ran as a third-Party candidate and got Bill Clinton elected by siphoning votes away from President George HW Bush.

It seems too soon to be talking about the 2024 presidential election, but expect Trump to clear the field on the GOP side if he decides to do something no president in modern history has done; seek a non-consecutive second term.

Posted by Steve Fair is a Jelly Salesman. at 9:19 PM