NO SOVEREIGN BUT GOD- NO KING BUT JESUS! 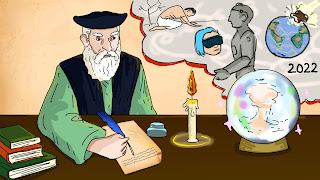 In 1555, Michel de Nostredame aka Nostradamus published a book titled, “Les Propheties,” a collection of 942 quartrains (4-line poems) that predicted future events.  The Frenchman was an astrologer, physical and reputed seer.  Nostradamus has been credited with predicting the rise of Hitler, the assassination of JFK, both world wars, the destruction of Hiroshima and Nagasaki, and the Great Fire of London.  Skeptics suggest no Nostradamus quatrain has actually predicted a specific event before it occurred, other than in vague general terms that could apply to any number of other events but that doesn’t deter his believers.   For 2022, Nostradamus predicts the invasion of France from the east (again), inflation and starvation, global warming, the rise of artificial intelligence.  Three predictions for 2022:

First, inflation will get worse before it gets better.  Wages will rise, but costs of food, housing, cars, and everything else will go up even more in the coming year.  The shipping port, and supply chain disruption will continue.  Government interference, regulations, mandates, and overspending will not help the situation.  A shortage of workers will continue.

Second, Americans will become more disillusioned with their government.  In a recent Washington Post-University of Maryland poll, one third of Americans said violence against the government is sometimes justified.  That number is up significantly over previous years.  40% of Republicans, 41% of Independents, and 26% of Democrats endorsed violence in certain situations.  Dissatisfaction with politics is not just restricted to the U.S.  In a Cambridge University poll ran in October 2020, over 50% of the world’s millennials are dissatisfied with democracy.

The apathy of baby boomers, as a whole, toward politics and public policy has resulted in the loss of economic opportunity, liberty, and personal freedom for themselves and their children.  Many boomers recently awoke from their decades long slumber to curse the darkness and to criticize those who lit a candle.  If they had been vigilant and faithful in their early years, the country wouldn’t be in the shape it is now.

Third, Republicans will gain control of Congress in the 2022 mid-term elections.  According to 580.com, a composite of five polls show the generic congressional ballot favors Republicans over Democrats 42.8% to 42% in the 2022 November midterms.  The tendency of the president’s Party to lose seats in Congress in midterm elections is one of the regularities in American politics.  Since WWII, the president’s Party has lost U.S. House seats in 17 of the 19 midterm elections.  The average loss in the Senate is between three and four seats.  34 of the 100 U.S. Senate seats are up for re-election- 14 Democrats and 20 Republicans.  There is also a special election in California to fill the unexpired term of Vice President Harris.   Gaining seats in the Senate in 2022 for Republicans will be difficult, due to Republican retirements.  Most incumbent Democrats are seeking reelection, but Americans are not happy with the direction President Biden has taken the country.  That doesn’t bode well for the Democrats, even if they are incumbents.

These three predictions for 2022 may or may not come to pass.  They are just an educated guess based on information known.  Gratefully, Christian believers don’t have to worry about what is going to happen politically or economically in 2022.  God has got the whole world in His hands.  He isn’t dependent on a political Party, political activists, elected leaders or midterm elections to accomplish anything.  He sovereignly works all things according to His will.  He is limitless in power and knowledge.  His prophecies aren’t like Nostradamus’ vague, hazy, murky prognostications.  They are absolute and will happen.

President John Adams said, “We recognize no sovereign but God and no King but Jesus.”  America would do well to get back to that committment.

Posted by Steve Fair is a Jelly Salesman. at 1:38 PM