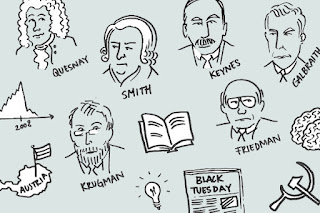 Economics is defined as the social science that studies the production, distribution, and consumption of goods and services.  There are two basic schools of thought in economics.  Free market/laissez-faire economics and Keynesian economics.  Adam Smith (1723-1790), a Scottish economist and philosopher, is often called the ‘father of modern economics.’  Smith introduced the concept of the ‘invisible hand,’ in regard to economics.  It was part of a laissez-faire/hands off governmental approach that holds an economy will find equilibrium without government or other interventions forcing it into unnatural patterns.  In other words, supply and demand rule the economy.  Smith believed it was the height of impertinence and presumption for government to tell people to restrain their spending when they(government) were spendthrifts. Smith argued a free-market economic system along with free trade would product true national wealth, benefiting all social classes, not just a privileged few.

Both economic schools of thought agree under ideal conditions, a country's economy should have the household sector as net savers and the corporate sector as net borrowers, with the government budget nearly balanced and net exports near zero.  When these relationships become imbalanced, recession can develop within the country.

Some governments highly control their economy.  In the most extreme, they are command economies where the government controls all the means of production, pricing of goods and services and worker’s wages.  Major industries are nationalized.  China, North Korea and Russia are all examples of command economies. In a free market economy, the law of supply and demand, rather than a central planner, regulates production and labor.  Companies sell goods and services at the highest price customers are willing to pay while workers earn the highest wage an employer is willing to pay for their services. The United States, Switzerland, and Great Britain are examples of free market economies. In reality, all economies blend some combination of market and command economies.

Inflation occurs when prices rise due to increases in production costs, such as raw materials and wages. A surge in demand for products and services can also cause inflation as consumers are willing to pay more for a product.  Inflation is an indirect tax on people.  Some inflation is acceptable, but when it climbs above 2% per year, it can disrupt an economy and potentially move it into a recession.  A recession is when there is a general decline in economic activity.  People stop spending and producers stop producing until stability returns to the market.  Prolonged inflation can and often does trigger a recession

The inflation rate in the U.S. is +7.9%- the highest in forty years.  According to Reuters, U.S. consumer debt is growing at the largest amount in fourteen years.  The average household has $155,622 in debt(includes mortgages)- up +6.2% from a year ago.  Government spending is at all time highs.  That is the trifecta of conditions for a recession, likely in 2023.

President Biden’s solution to attack inflation?  More taxes.  Last week, he proposed a $2.5 trillion dollar tax increase on the wealthy and corporations.  The problem is corporations don’t pay taxes- people do.  Corporations pass through tax increases to the consumer.  Reduction of government spending, allowing hard working Americans to keep more of their money and reducing government’s footprint will get inflation under control.  President Biden’s increasing taxes on Americans won’t work.

Posted by Steve Fair is a Jelly Salesman. at 6:30 PM

Steve, I like the direction you took in this post. You had me wondering here whether you'd inject your usual template, a set of three "observations" of yours, until the last paragraph. It reminds me of the post you wrote near the start of the war in Ukraine in that you largely kept to facts.

The problem with this post is that, as a whole, it's entirely too brief on elaborating on your opinion. You say that the problem with increasing taxes on the wealthy and corporations is that the affected parties will not pay their taxes out of revenue and instead find a way to pass the costs to the consumers. I agree that is a problem.

Your solution to oppose new taxes on the wealthy and corporations is not something I agree with. These people--these heirs and executives and founders and exploiters of the free market economy as well as America's labor force--the top earners--should absolutely be required to pay their fair share. If these higher taxes go into effect, do you think the prices of goods and services would rise to cover the cost? Wouldn't it be most beneficial for the average consumer if the costs did not rise as a reflex to higher tax legislation?

From what I gather from your posts, you must agree that that would be a more adequate solution. But if you came to the same conclusion I did, you would say that the real solution is to close existing tax loopholes on the wealthy and reinforce and strengthen the labor laws so that the consumers do not end up paying taxes by proxy in the name of corporate greed.