TAXPAYERS SHOULDN'T BE EXPECTED TO BAIL OUT THOSE WHO WILLINGLY ASSUMED STUDENT LOAN DEBT! 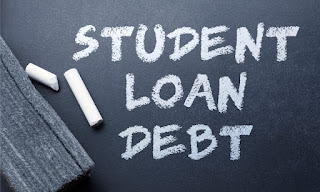 In the late 1990s, then U.S. Senator Joe Biden played a role in helping establish and expand the current student loan system, which makes taxpayers co-signers on every student loan.  Biden was one of the architects of bankruptcy reforms making it hard for those with student loan debt to discharge their student loan debt by declaring bankruptcy.  President Biden likely regrets that.  Three observations:

First, the government and higher education created the student loan debt crisis.  The default crisis is a direct result of the fed’s reckless student lending policy.  There is certainly a role for government in fixing it, since they created it, but that role is not to cancel loan debt.  Colleges and institutions of higher learning ‘sold classes’ to students who had no business going to college.  Colleges were more interested in increasing revenue than educating students.

Second, forgiveness of student loan debt will increase inflation.  The Committee for a Responsible Federal Budget(economists) estimate cancelation of 10k of student loan debt per person will increase inflation by .5 percentage rates over the next year.  Senator Warren (not an economist) disagrees.  “As President Biden himself says, the way we deal with inflation is not by making people poorer.  The way we deal with inflation is we attach high prices head on, such as price gouging.  We straighten out the supply chain, so goods can come in to people.  Canceling student loan debt is something that would be good for people all across this country and more importantly, good for our economy overall.”  Warren said.   The government has neither the manpower or the brainpower to police price gouging, let alone fix the supply chain?  Government bail outs and giveaways are why we have inflation.

Third, borrowers should be responsible for their student loans.  While the government’s irresponsible lending practices and college’s zeal to sell classes to people played a role, the borrower made the decision to incur the debt.  It is not the taxpayer’s responsibility to ‘bail them out.’   Government should reduce administrative fees and seizures on borrowers who are in default.  Those fees often result in more than the principal.  They need to make sure low-income borrowers never face a situation where they can’t make the monthly payment.  They should guarantee those who owe less than $20,000 who are making payments on time never go backward because of fees.  The feds should penalize colleges where class selling is a practice and limit their ability to be eligible for student loans.  Ultimately, the person who signed the note, and not the taxpayers, should be responsible for the debt.  Actions have consequences.

President Biden has extended a repayment moratorium on repayment, interest and collections for federal student loans to August 31st. This is the fourth extension since Biden took office.  Expect some sort of student loan debt forgiveness before the midterms.  With $4 gasoline and record food prices, Democrats must do something to excite their base.  If Biden cancels student loan debt, it will reinforce the idea Americans should rely on the government to fix their problems when they willingly assumed the risk.

Posted by Steve Fair is a Jelly Salesman. at 2:24 PM