CLEAN UP OKLAHOMA HAS A LIBERAL AGENDA! 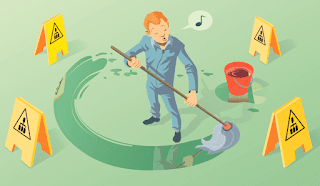 Clean Up Oklahoma(CUO) is an organization that claims to want to stop politicians from abusing their power.  They urge Oklahomans to ‘get their mop’ and clean up Oklahoma politics.  They have an anti-corruption pledge they want every candidate to sign.  The three major points in the pledge are to: (1) Prevent politicians, their staff, and donors from profiting at the taxpayers’ expense, (2) Strengthen open records laws to stop secret deals and gifts from special interests, (3) Stop the rigging of our elections and return power to the voters.   Sounds good, doesn’t it, but who exactly is Clean Up Oklahoma and who is funding them?

Clean Up Oklahoma attests to be a non-partisan grassroots movement, but that isn’t true.  The Director of Clean Up Oklahoma is Jay Williams, a former staffer for Kendra Horn, the one term defeated 5th district Democratic Congresswoman now running for U.S. Senate against Mark Wayne Mullin.  Williams also was an active member of the Bernie Sanders campaign.  That is partisan.

In the pledge CUO wants candidates to sign, they advocate for open primaries, taxpayer funded political campaigns, and a non-partisan (appointed) redistricting commission.  All of these ideas are directly from the Democrat Party playbook.  That’s partisan.  Three observations:

First, Oklahoma could use some cleaning up.  The recent Epic school debacle is a good example that corruption is alive and well in the Sooner state, but signing a pledge (especially this one) will not eliminate corruption.  Mankind is born with a sin nature and unchecked, that nature will produce corruption. As long as man is on this earth, there will be corruption, deceit, and duplicity.

Oklahoma is not nearly as corrupt as it was the first 100 years of statehood- all under Democrat control.  The Oklahoma county commissioner scandal was the largest in American history.   In the late 1990s, Democrat legislators put their family on state payrolls as ghost employees and state tax dollars were appropriated for non-existent dog food plants.  Both those scandals were uncovered by the federal government because Oklahoma state officials were unwilling to expose their good ole boy buddies.  That has changed.  The most recent corruption in Oklahoma has been investigated by state officials. That is progress.  At least our state leaders are willing to expose corruption, unlike in the past.

Second, Clean Up Oklahoma isn’t really against corruption- just corruption that doesn’t include them.  CUO wants open primaries because they are losing elections in Oklahoma.   Winning an election in Oklahoma means you have to run as a Republican.  Democrats know the only way to change that is to change the rules.  Clean Up Oklahoma doesn’t want fair elections- they want to tilt the table to help them win elections.  Open primaries are a petri dish for corruption.

Open primaries would allow Democrats to vote in a GOP primary, which makes about as much sense as the Baptists letting Presbyterians vote in their business meetings.   Their other ideas are just as foolhardy.

Third, there is no truth-in-labeling in politics.  All consumer goods are subject to laws that require the manufacturer to disclose net contents and the name of the producer.  Food items are required to provide nutritional information.  When consumers see or hear an advertisement, whether it’s on the Internet, radio or television, or anywhere else, federal law says the ad must be truthful, not misleading, and, when appropriate, backed by scientific evidence.  Violations can result in action from the Federal Trade Commission.  Sadly, no such law exists for politics.  In politics, you can call a baloney sandwich crème brulée without liability.

Because there is no accountability, Clean Up Oklahoma is playing dirty politics without consequence. Only their non-existent conscience guides them.  They run false and misleading television ads and flood social media with delusive messages- all while claiming to take the high road.  Low information, unenlightened voters are their target audience.  The only cleaning up in Oklahoma Clean Up Oklahoma wants is to elect liberals in November.  Don’t be fooled by clever branding- they are not mopping up corruption- they are polluting.  Candidates that sign their pledge should be avoided, not lauded.

Posted by Steve Fair is a Jelly Salesman. at 1:24 PM