OKLAHOMANS NEED A GOVERNOR WHO WILL REPRESENT ALL CITIZENS! 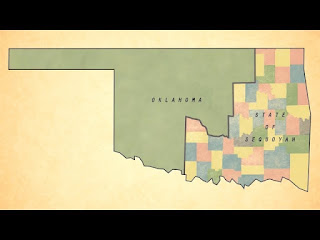 THE STATE OF SEQUOYAH!

Most Oklahomans know the Five Civilized Tribes were relocated from the southeast U.S. by the federal government to Indian Territory in the 1830-40s.  Those five tribes are the Cherokee, Chickasaw, Creek, Choctaw and Seminole.  In 1851, Congress passed the Indian Appropriations Act, which created the reservation system and provided funds to move Indians onto farming reservations.  The Dawes Act of 1887 granted private land ownership to tribal members, but the net result was tribal member’s land being reduced by one half.

In 1906, Congress passed the Oklahoma Enabling Act, whose stated intent was to disestablish the afore mentioned reservations of the five tribes.  The action was required by Congress so Indian Territory and Oklahoma Territory could merge and be admitted to the union in 1907.  The 2020 McGirt decision ruled the reservations were never disestablished and are still intact.  That decision has created a legal quagmire and could ultimately spilt the Sooner state in two.

This week, the five tribes endorsed Superintendent of Public Instruction Joy Hofmeister for governor.  Hofmeister is the Democrat Party nominee.  She was elected twice to her current post as a registered Republican, but changed political affiliation to run for governor.  Some recent polls show the race close between her and GOP nominee, Governor Kevin Stitt, an enrolled member of the Cherokee tribe.  The only reason the race is competitive is the monies the tribes are pumping into Hofmeister’s campaign.  Three observations:

First, the tribe’s issue with Kevin Stitt is about money.  In 2004, Oklahoma voters approved State Question #712 by a 60-40% margin.  712 enacted a Tribal Gaming Compact allowing tribes to operate slot machines and card games.  The 15-year compact, negotiated by former Governor Brad Henry and then State Treasurer Scott Meacham, required 6-13% of the money casinos take in go to the state.  88% of the amount is earmarked for education.

The compact was set to expire in 2020.  After he took office, Stitt proposed the tribes give the state a higher take than the original agreement, but the tribes balked.  The tribes claimed the original compact rolled over and they are under no obligation to renegotiate.  In 17 years, the state’s tribal gaming industry  has grown to over 150 casinos.  Hofmeister agrees with the tribes and has no problem with their sweetheart deal.  The tribes want a puppet in the governor’s mansion, not a partner.  They are happy with the current spilt because after all- the house always wins.

Second, the tribe’s formal endorsement will not likely impact the election.  Tribal membership in Oklahoma is less than 14% of the population and Native Americans have a history of not voting.  In a study by Steven Doherty, he found they were 51% less likely to vote than other races.  The tribes spend a lot of money on politics.  They fund campaigns for candidates that will promote their agenda (like Hofmeister).  They employ an impressive lobbying apparatus at the State Capitol.  The public endorsement, while impressive optically, is doubtful to influence their rank-and-file tribal membership.

Third, Hofmeister wants to be governor of the State of Sequoyah.  Hofmeister said if she was elected, she would just an equal participant at the negotiating table with the tribes, not the head.  Oklahomans don’t need a governor who doesn’t lead and believes representing 14% of Oklahomans is justifiable.

In 1905, the State of Sequoyah was proposed to Congress.  It would have composed the eastern part of the state- about 44% of the land mass of Oklahoma.  A Constitutional Convention met in Muskogee.  A vote was taken in Indian Territory.  The constitution was approved by a 6 to 1 majority.  President Teddy Roosevelt opposed admitting two states.  The Rough Rider proposed combining the two territories into one state, gaining widespread support in Congress.  The State of Sequoyah evaporated and the State of Oklahoma was born.  With the McGirt decision and the recent attitude/endorsement of the five tribes, it appears the State of Sequoyah has been resurrected.

Posted by Steve Fair is a Jelly Salesman. at 3:13 PM