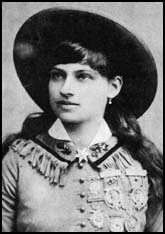 ANNIE OAKLEY & THE ELITIST!
by Steve Fair
On April 6th in San Francisco, Senator Barick Obama the presumptive Democratic Presidential candidate said at a fundraiser, “you go into these small towns in Pennsylvania and, like a lot of small towns in the Midwest, the jobs have been gone now for 25 years. … And it’s not surprising then they get bitter, they cling to guns or religion or antipathy to people who aren’t like them or anti-immigrant sentiment or anti-trade sentiment as a way to explain their frustrations.”
Obama has since apologized for impugning small town America by saying, “I regret some of the words I chose, partly because the way that these remarks have been interpreted have offended some people and partly because they have served as one more distraction from the critical debate that we must have in this election season.”
Eager to take advantage of any slip up by Obama, Senator Hillary Clinton went on the attack, saying Obama’s statements about small town, rural America were elitist and condescending. She said Obama was out of touch with small town America. To emphasize her small-townness, Hillary even went so far as to describe how her grandfather taught her to shoot a gun behind a cabin in rural Pennsylvania. That lesson in gun safety and self-defense was conducted when Clinton was a child; years before Hillary learned guns were evil and had no use in the hands of private citizens.
Clinton’s record on guns is consistently bad. According to Gun Owners of America, ‘"there is really little point in detailing Clinton's vote-by-vote record on the Second Amendment.” “That's because every single time there has been a gun-related vote in the Senate that GOA has tracked, Sen. Clinton has voted anti-gun.” “ Without fail, she opts to restrict the rights of Americans to keep and bear firearms -- 100% of the time.”
Hoping to seize on the opportunity of another Clinton “inconsistency, “ Obama’s counter was quick. He said that Clinton was trying to portray herself as “a defender of the Second Amendment, an Annie Oakley, sitting in a duck blind and carrying a six shooter.”
There are at least two problems with the Democratic candidates talking about the 2nd amendment. First, the second amendment isn’t just about hunting. That’s what some Americans think it’s about, but the original intent and purpose of the Second Amendment was to preserve and guarantee, not grant, the pre-existing right of individuals to keep and bear arms. Although the second amendment emphasizes the need for a militia, membership in any militia, let alone a well-regulated one, was not intended to serve as a prerequisite for exercising the right to keep arms.
And secondly, both Obama and Clinton have an “F” rating from the Gun Owners of America based on their voting records in the Senate. That proves neither understand, respect or believe in the second amendment.
While no substantial polling has reflected the impact of Obama’s slam of small town America, Hillary did manage to gain one delegate as a result Barrack’s misstep. Yellowstone County, Montana, Commissioner Bill Kennedy said Obama’s remarks demonstrate he doesn’t “get” rural America. “In Montana, going to church or going hunting is part of our heritage, not something we ‘cling to’ out of bitterness or frustration,” Kennedy said in a statement released by the Clinton campaign. “Sen. Obama showed a real disconnect with rural Montana. It might work to look down on us from San Francisco, but it won’t sell when he comes back to Montana.” Well said Mr. Kennedy, but be careful- you’re getting dangerously close to talking like a Republican. In small town America, Democrats go to church, have guns, and the only bitterness and frustration they have is with their national political leaders.
For those who don’t know, Annie Oakley was a markswoman known for making spectacular trick shots. Oakley, who died in 1926, was a devout Quaker who had learned the skill of marksmanship by necessity. After Annie’s father died, she had to help out on the family farm by shooting small game to provide food for the family. Annie toured with Buffalo Bill’s Wild West show for seventeen years. Oakley was a true American patriot. In a letter written in 1877 to then President William McKinley, Oakley offers the services of a company of fifty lady American sharpshooters that would provide their own arms and ammunition to the government should war break out with Spain. Oakley realized that freedom wasn’t free and she was willing to sacrifice to preserve that freedom. Her letter to McKinley is housed in the National Archives of the United States.
Obama is right when he says Hillary is not Annie Oakley. Unlike Hillary or Obama, Annie Oakley never ambushed or bushwhacked anyone. Annie Oakley never lied about running to escape sniper fire. Annie Oakley didn't make shady real estate deals with crooks. Annie Oakley was humble and unselfish. She helped her family, friends and the downtrodden. Annie Oakley wasn’t an elitist. Annie Oakley was a Republican.
Posted by Steve Fair is a Jelly Salesman. at 8:55 PM