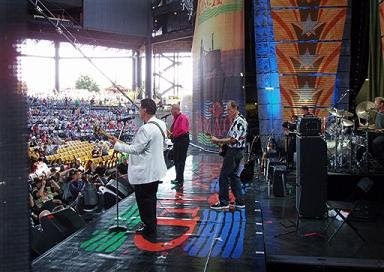 Need a bass player!
Governor Huckabee should run for Senate against Pryor
2nd Admendment Band!
from thehill.com
Lawmakers weighed retirement with rock band membership The congressional band the Second Amendments, composed of Reps. Collin Peterson (D-Minn.), Kenny Hulshof (R-Mo.), Dave Weldon (R-Fla.), Jon Porter (R-Nev.) and Thaddeus McCotter (R-Mich.), will soon change.
With the retirements of Hulshof and Weldon, the band needs new blood. The new band, confirmed Peterson, will include Rep. Bill Sali (R-Idaho) on drums and Rep. John Hall (D-N.Y.), co-founder of the 1970s band Orleans, on vocals or keyboards. Both Sali and Hall have already begun practicing with the group.
Peterson said Hulshof and Weldon seriously weighed their retirements because of their membership in the band. “Frankly, one of the main things they had to consider was the band,” he said. “I don’t know how much, but it was a consideration.”
“He absolutely did,” said Hulshof spokesman Erik Rasmussen. “Kenny has established a great friendship with the members of the band. It’ll be a lifelong friendship. He’ll miss them terribly.”
“Obviously, I think he was joking,” said Weldon spokesman Jeremy Steffens of Peterson’s remarks.
“[Weldon] enjoys playing in the band, but I don’t think he’d stay in Congress just to stay in the band. He’s leaving because he wants to go spend time with his family and return to his medical practice. I’m not sure [the band] is why he has stayed in Congress the last seven terms.”
Band members are contemplating calling themselves the Fifth Amendments. “The Second Amendments are going to take the Fifth,” Peterson joked.
But on a serious note, change isn’t easy. “There is some nostalgia that the band is going to change because we bonded in Iraq,” he said, referring to the group’s musical missions.
Posted by Steve Fair is a Jelly Salesman. at 9:30 AM