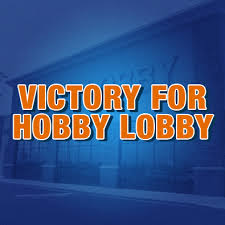 BUSINESSES HAVE VALUES!
by Steve Fair
On Friday, a federal judge in Oklahoma City issued an injunction in favor of Oklahoma City based Hobby Lobby Stores.  The injunction means Hobby Lobby won’t have to pay millions of dollars in fines because they will not provide health insurance that covers abortion inducing drugs for their employees.

Hobby Lobby is owned by the Green family.  They are Southern Baptist who say their religious convictions prevent them from providing the insurance to their 13,000 employees.  Hobby Lobby calls itself a "biblically founded business" and is closed on Sundays. Founded in 1972, the company now operates more than 500 stores in 41 states
Because the new Affordable Care Act mandates businesses to provide insurance that covers abortion drugs, the Green family decided to bring a suit against the federal government.  They lost the first round in the U.S. District Court for the Western District of Oklahoma.  Hobby Lobby then appealed to the 10th Circuit Court of Appeals in Denver.

The 10th Circuit opted to hear the case before eight active judges, not the typical three-judge panel, indicating the case's importance. In late June, the upper Court ruled 5-3 in favor of Hobby Lobby. "Sincerely religious persons could find a connection between the exercise of religion and the pursuit of profit," the judges wrote. "Would an incorporated kosher butcher really have no claim to challenge a regulation mandating non-kosher butchering practices?"  Hobby Lobby's lawsuit now heads back to U.S. District Court for the Western District of Oklahoma for a second argument.

David Green, the founder of Hobby Lobby, said in a statement sent to Capitalbeatok.com (http://www.capitalbeatok.com/reports/hobby-lobby-secures-preliminary-injunction-against-abortion-mandate-in-obamacare) that Hobby Lobby has endured “by God’s grace and provision.” Green went on to say, “The conflict for me is that our family is being forced to choose between following the laws of the country that we love, or maintaining the religious beliefs that have made our business successful.”

A couple of observations:

First, this tenet of ObamaCare may be the thread that unravels the whole garment.  The Alliance for Defending Freedom is representing over sixty(60) other plaintiffs across the country challenging the legality of the government forcing family business owners to conduct business in conflict with their faith.  Companies and educational institutions like Geneva College, Seneca Hardwood, and Wheaton College of Illinois are bringing similar lawsuits to Hobby Lobby’s.  They don’t want to be a party to killing babies in the womb and have went to court to challenge government’s authority to make them.


Second, businesses are not just secular organizations.  They are made up of individuals and groups who hold certain philosophical positions, both conservative and liberal.  Should a businessperson be forced by the government to check his values and views at the door?  Certainly not!  Family owned businesses should not be forced to violate their personal convictions to do business in the marketplace.  To make it unlawful to not provide insurance to kill children in the womb seems ridiculous.  To expect people of conviction to simply capitulate and submit to a law they know violates the Word of God is naïve on the part of government.

Sometimes government forgets that it derives its power from the people and the people derive their rights from God.  When we get those simple facts tangled up, it creates a society that will not prosper.