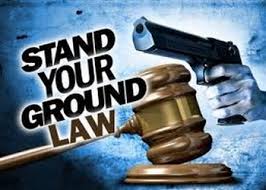 STAND YOUR GROUND UNDER ATTACK!
by Steve Fair

The recent George Zimmerman/Trayvon Martin incident has placed a spotlight on so called ‘Stand your Ground” laws in America.  A stand-your-ground law is a type of  self-defense law that gives individuals the right to use reasonable force to defend themselves.  Over half of the states in America have a version of stand-your-ground.  Since Martin’s shooting, the issue being debated is whether the concept only applies to defending a home or vehicle, or whether it applies to all lawfully occupied locations.

Oklahoma has a stand-your-ground law that is basically the same as the Florida law.  Authored in 2006 by then Representative Kevin Calvey, an OKC Republican, the law says that an Oklahoma citizen has a right to defend themselves.  The statute reads, "A person who is not engaged in an unlawful activity and who is attacked in any other place where he or she has a right to be has no duty to retreat and has the right to stand his or her ground and meet force with force, including deadly force, if he or she reasonably believes it is necessary to do so to prevent death or great bodily harm to himself or herself or another or to prevent the commission of a forcible felon."

Last week, Oklahoma State Representative Mike Shelton, D- Oklahoma City, issued a press release through the State House media department stating he was conducting an ‘interim study’ on Oklahoma’s stand-your-ground and open carry laws.  “This issue has been on my heart for some time,” said Shelton in the press release. “We don’t need to look to Florida or any other state for a tragedy. Oklahoma has its own stories. Now seems like a good time to carefully weigh all sides of the issue and determine whether or not Oklahoma’s version of ‘Stand Your Ground’ and open carry best suits our needs and our situation.”

A couple of observations:

First, Shelton’s interim study is NOT an official interim study.  OFFICAL Interim studies are requested by members of the legislation to study an issue or a bill during the period the legislature is not in session.  Interim studies are then either approved or disapproved by the legislative leadership.  It doesn’t appear Shelton submitted a request to House Speaker T.W. Shannon to conduct an interim study on stand-your-ground and open carry.  Shelton just set up this ‘ad hoc’ independent study that has no ‘official’ purpose.  He can have as many ‘ad hoc’ meetings as he wants, but he shouldn’t have attempted to convey this was an approved study by House leadership.

Second, most Oklahomans and Americans favor “Stand Your Ground” laws.  A recent Rasmussen Reports poll found 45 percent of American adults favor having a stand your ground law in their state. Just 32 percent are opposed. Another Rasmussen Reports poll found just 34 percent of voters think the federal government should be responsible for gun ownership laws. Thirty-six percent believe state governments should have that responsibility; 17 percent feel that local governments should be in charge of gun laws. The findings suggest strong public support for defensive use of guns — not an outcry for stricter federal gun control.  Those numbers are significantly higher in Oklahoma.  Shelton will not find much sympathy for gun control in Oklahoma, even in his own party.

Perhaps a review of the effect of conceal/carry and stand-your-ground laws on crime rates in Oklahoma would make a good interim study.  But Shelton, the most liberal member of the State House, is not the person to conduct it.  His ‘ad hoc’ study will approach this issue with a predetermined outcome- that Oklahoma needs to repeal stand-your-ground and disarm law abiding Oklahomans- and that would a step backward in Oklahoma.
Posted by Steve Fair is a Jelly Salesman. at 10:32 AM