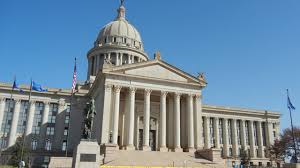 Governor Mary Fallin has indicated she may be calling a special session of the Oklahoma legislature to deal with tort reform.  "A special session is an option I am looking at," Fallin said at a Tulsa luncheon. "I've talked to the speaker and the pro tem about the possibility of a special session to fix what I consider one of our most important pieces of legislation."

Section 27 of Article V in the Oklahoma state constitution contains the rules for convening special sessions of the Legislature.  A special session can be called by either the Governor or two thirds of the members of both chambers.  In 1980, Oklahoma voters passed State Question #540 that extended that authority to the legislature itself.

More recently there have been legislative special sessions in 2001 2004, 2005 and 2006, all called by the Governor.  The 2006 special session was called to deal with the state’s budget.  Republicans had control of the House and were tied in the Senate and no consensus could be reached on the budget during the regular session, so Oklahoma taxpayers had to pay overtime to get the budget finalized.

First, special sessions are expensive.  When you call 149 legislators back to work for a special session, it will cost the taxpayers of Oklahoma over $100,000 per day.  This is particularly disturbing when you consider a special session was unnecessary.  The irresponsible activist ruling from the state’s high court cost YOU money.

Second, Governor Fallin should expand the subjects to be discussed during special session to include judicial term limits.  Oklahoma’s current retention ballot system for Justices is clearly not working.  We have term limits for our legislators and statewide elected officials.  It’s time to limit the judges.  When they make rulings that are clearly political, then they should leave the bench.  If we ignore their activism we have relinquished our right to be self governed.

President Lincoln said, “I do not forget the position assumed by some that constitutional questions are to be decided by the Supreme Court... At the same time, the candid citizen must confess that if the policy of the government upon vital questions affecting the whole people is to be irrevocably fixed by decisions of the Supreme Court, the instant they are made ... the people will have ceased to be their own rulers, having ... resigned their government into the hands of that eminent tribunal.

Posted by Steve Fair is a Jelly Salesman. at 8:47 AM