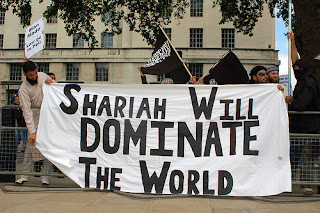 SHARIA NO MORE!
by Steve Fair

In November 2010, over 70% of voters in Oklahoma voted to pass State Question 755. SQ #755 amended the state constitution to ban Sharia and International law from being used in state courts. The day after the election, the Oklahoma chapter of the Council on American-Islamic Relations(CAIR) announced a lawsuit challenging the constitutionality of the law.  CAIR officials said the ban on Sharia was unnecessary and discriminatory.  Oklahoma Western District judge Vickie Miles-LaGrange agreed with them and issued a restraining order that delayed implementation of the ban.
The state of Oklahoma appealed Miles-LaGrange’s ruling to the 10th Circuit Court of Appeals who agreed with the lower court ruling.  Last week. LaGrange issued an order barring the Oklahoma state election board from certifying the results of SQ 755, handing Oklahoma voters yet another defeat in their battle to ban Sharia.
The proposed constitutional amendment read, in part: “The courts shall not look to the legal precepts of other nations or cultures. Specifically, the courts shall not consider international law or Sharia law.” Oklahoma was the first state in the country to consider a measure to restrict judges from consulting Sharia law when making decisions.  Since that time, more than two dozen states have considered similar measures.  In fact a bill that would ban Sharia law in North Carolina is on the Governor’s desk awaiting his signature.
Shariah law is based on the Quran, which Muslims believe is the word of Allah as dictated to the prophet Mohammed.  Under Shariah law, freedom of religion and other civil liberties in the U.S. Constitution – in fact the very concept of man-made law – are incompatible with Islam.  Shariah is not a radical concept in Islam, but a ‘fundamental’ tenet of the faith.  Shariah is held by mainstream Islamic authorities and not just the fringe extremist elements who have supposedly “hijacked” the religion.
I have three observations on the Sharia ruling:
First, Miles-LaGrange’s ruling overturns the will of the voters of Oklahoma.  There was a time in America when judges were reluctant to overturn the vote of the people, but no more.  When over 70% of Oklahomans vote to ban Sharia and International law, it’s clear the governed want it banned.  What is unconstitutional about a law that reinforces the ‘exclusivity’ of the U.S. constitution in our courtrooms?  Absolutely nothing!  State Senator Anthony Sykes, (R-Moore) the author of SQ #755 said “One has to wonder how much longer the people will continue to even be relevant in our system of government if we continue down this path. I am a firm believer that all power in government comes from the consent of the governed.”
Second, Sharia is a real threat to America!  Read Shariah: The Threat to America, a book that describes in detail precisely what Shariah is and what it means for all of us.  The book uses the illustration of Europe, where a number of nations have integrated Shariah law into their culture and court rulings are often based on Sharia.  Former U.S. House Speaker New Gingrich says, “I believe Shariah is a mortal threat to the survival of freedom in the United States and in the world as we know it.   I think it’s that straightforward and that real.”

Third, Sharia is already being used in America’s courts!  Major Nidal Hasan, the Fort Hood shooter, attempted to use Sharia law as his defense.  In a New Jersey case, a judge denied a restraining order to a woman who was sexually assaulted by her then-husband on the basis the husband did not have a "criminal desire to or intent to sexually assault" her as the husband was merely under the impression that he was exercising his prerogative as a husband under Islamic law(Sharia).  Recently a Florida appeals court ruled that a lawsuit over a monetary dispute at a mosque can be determined by Islamic Sharia law-in a U.S. court, no less.  Senator Sykes says, “Sharia is a competing constitution and will plunge our Nation into chaos. I cannot understand how an American can look at the government in Iran and what is going on in Egypt today and want that here.”
An out of control judiciary branch of government is doing more damage in America than the executive and legislative branches combined.  While we argue and bicker, the courts are slicing our liberty and freedom off at a record pace.  We need judicial term limits at all levels in America.

For more information on this subject, go to http://ricochet.com/main-feed/My-Sharia-More/

Posted by Steve Fair is a Jelly Salesman. at 1:26 PM