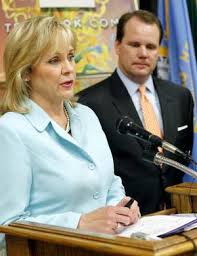 Last week, Oklahoma Governor Mary Fallin was officially installed as the Chair of the National Governors Association (NGA).  The NGA serves as a key public policy liaison between state government and the federal government.  The NGA provides governors and their senior staff members with services that range from representing states on Capitol Hill (lobbying) to developing policy and best practices reports on state programs and hosting networking seminars for state executive branch officials.
Governor Fallin announced that her initiative during her year long term as Chair will be, “America Works: Education & Training for Tomorrow’s Jobs.”  “Improving our workforce and ensuring it remains internationally competitive is an issue that calls for national attention and demands gubernatorial leadership,” Fallin said. “Our future economic security will require significant improvements to our education system and workforce training programs. It also will require closer relationships among our high schools, colleges, workforce training providers and employers.”
According to the NGA, in the 1960s, 75% of jobs in the marketplace only required a high school diploma, but today that number has dropped to less than 40%.  According to the federal Department of Education just over 75% of public high school students make it to graduation.  “While a high school diploma was usually sufficient for our parents’ generation to have access to a good life, today a postsecondary degree or relevant workforce certificate is the ‘new minimum,’” Governor Fallin said. “Failing to provide all of our students with opportunities to successfully navigate postsecondary education will cap far too many students’ potential and limit their access to the middle class.”
The initiative will focus on what government can do to help public education and private industry prepare students for jobs once they complete their education.  It will also help states identity what their anticipated future labor demands will be and help them plan accordingly.
This initiative sounds a lot like School to Work.  School to Work is a system to introduce the philosophy of school-based, work-based, and connecting activities as early as kindergarten to expose students to potential future careers.  I’m not sure I want my grandchildren being pigeonholed into their career path in kindergarten.  I do believe that public education should be training children for life, which includes work.   I’m just not convinced, telling one 5 year old he is going to be a plumber and another a doctor, based on testing, is the job of public education or government.
Coincidentally, Governor Fallin is serving as NGA Chair at the same time as Lt. Governor Todd Lamb will serve as Chair of the National Lt. Governor’s Association (NLGA).  Lamb was installed in July at their annual meeting held in Oklahoma City.   “Serving in leadership at the NLGA has been an honor and I am humbled that my fellow Lt. Governors have elected me as Chair,” said Lamb. At their meeting, the Lt. Governors focused on response to natural disasters in their states.
Oklahoma and America will benefit by having Fallin and Lamb heading up their respective associations.  First, because they are both fiscal conservatives and don’t believe that throwing money at a problem is always the best solution.  Second, both are common sense leaders who understand what it takes to move a state forward.  They both served in the Oklahoma legislature when Democrats ruled Oklahoma with an iron fist and during that reign, the state was near the bottom in per capita income and high in tax burden.  They have been a part of the reason the Sooner state is doing better than other states in recruiting business, reducing the tax burden and improving life for the average Oklahoman.  Let’s just hope the feds listen to them.
Posted by Steve Fair is a Jelly Salesman. at 9:33 AM