KEEP YOUR EYE ON THE BALL! 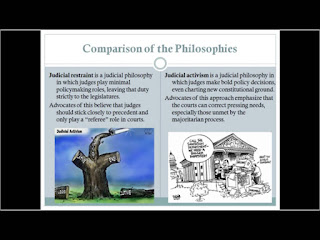 RESTRAINT OR ACTIVIST?
by Steve Fair
The balance of the U.S. Supreme Court hangs in the balance with the November election.    There is already one vacancy, created by the death of Justice Antonin Scalia, a conservative voice on the court.  Justices Ginsberg and Kennedy are both in their 80s and most likely the next POTUS will appoint at least three justices in their first term.  Four of the current Justices were appointed by Republican presidents, four by Democrats.  Balance on the court is critically important and Clinton will most certainly appoint liberal jurists to the court.  Here is a little history on the function and duty of the SCOTUS.
In 1789, Article 3 of the U.S. Constitution established the high court.  It doesn’t specify how many justices, but originally there were only six members and each decision had to be approved by a two-thirds majority (4 to2).  Congress increased the number from seven to nine to ten before passing the Judicial Act of 1866 which established eight Justices and a Chief Justice(the current make-up).  Monkeying with the court has been done several times in our nation’s history, most famously in 1937, after the conservative SCOTUS overturned several of his ‘New Deal’ proposals calling them an overreach of federal power, President Roosevelt attempted to ‘pack the court’ by adding more justices.  His plan failed and the number remained at nine.
John Jay was the first Chief Justice of the SCOTUS.  Under the first three Chief Justices, the court heard few cases and had little prestige, but that changed when John Marshall became Chief Justice in 1801.  Marshall had a forceful personality and guided the court to take unprecedented steps in several cases, including the famous Marbury v. Madision case.  That case formed the basis for the SCOTUS to exercise power to review laws passed by Congress
There are two fundamental judicial philosophies that guide justices/judges; judicial activism and judicial restraint. The judicial activist holds to the view that the duty of the court is to interpret the law by taking into consideration changes with the times.  In other words, the activist believes the constitution is a living document. The judicial restraint position is that laws should not be struck down unless they are obviously unconstitutional and interpretation should be based on the original intent of the writers of the founding document.  Scalia, Thomas, and to a lesser degree Roberts favor judicial restraint.  The remaining justices are activists.
During her tenure in the U.S. Senate, Secretary Clinton voted against confirming both Justices Alito and Roberts based on their ‘restraint’ judicial philosophy.. “I did oppose Justice Alito and Chief Justice Roberts, because after listening to them, I did not believe that their judicial philosophy and approach was one that would be the best for the country,”  Clearly Clinton would appoint jurists who are activist in their judicial philosophy.
In May, Trump released a list of eleven potential judges he would consider appointing to the high court.  It is a safe list, with all eleven having been appointed by a Republican and all ranked very highly by the conservative Federalist Society, a law group who favors restraint as a judicial philosophy.
How important is this election?  If Hillary Clinton is elected, she will shape the SCOTUS into the most progressive/liberal court since the 1960s. Sixty years ago, Chief Justice Earl Warren led the high court to expand federal overreach and to end voluntary prayer in schools. The Warren court is often citied as the most liberal and political SCOTUS in our nation’s history.
You may not like Donald Trump.  He can be brash, loud, arrogant, insulting, proud, and condescending.  But only two people have a realistic chance of becoming the POTUS- Hillary Clinton and Donald Trump.  Anyone who believes a third party candidate is going to pull an upset is living a pipe dream.  Those who plan to sit this one out or who plan to vote for a third party candidate because they don’t like Trump fail to recognize what is at stake; the future of the SCOTUS for the next fifty years.  We know what Hillary will do if elected.  She will appoint liberals to the high court.  While there are no guarantees, Trump, says he will appoint judges who would exercise judicial restraint.  This isn’t about Donald Trump- this is about the future of America. Conservatives need to play attention and keep their eye on the ball.
Posted by Steve Fair is a Jelly Salesman. at 12:39 PM