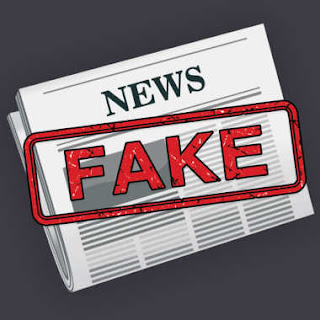 Fake news has been in the news.  Speaking for the first time publically last week since her November 8th defeat Hillary Clinton said: “The spread of fake news, which has flooded social media over the past year is a trend that can have real world consequences. This is not about politics or partisanship. Lives are at risk, lives of ordinary people just trying to go about their days to do their jobs, contribute to their communities.  It is a danger that must be addressed and addressed quickly."
The former Secretary of State called for Congress to step up and pass legislation to stop ‘fake news.’  She also encouraged Tech companies like Facebook and Twitter to find ways to keep fake news from being propagated through social media.
First, what is ‘fake news?’  Did Clinton mean news that was not true or exaggerated?  Did she mean news that only presented one side while claiming to present equally both sides of an issue?    In the past, journalists have presented themselves as being ‘above the fray.’  They tried to be tough, but fair.  Those days are long gone.  Fox, CNN, ABC,CBS,NBC, MSNBC have multiple talking heads spouting their editorial/opinions disguised as news.  Some fully disclose they are expressing their opinion, but most do not.  The fact is no newsperson or journalist is without bias.  Every human being, including journalists, filter and process information through the prism of their life experiences, education, and values.
Second, Clinton has consistently used ‘fake news’ to further her political career.  Immediately after Clinton’s claim ‘fake news’ was a reason for her defeat, the conservative online ‘news’ outlet Breitbart posted a story with eight examples of Clinton making ‘fake news’ claims.  They include her claim the attack on Benghazi was because of a YouTube video, that when she landed in Bosnia in 1996 it was under sniper fire, that her grandmother was an immigrant, and that she never received or sent classified information on email server.  All of those claims were proven to be ‘fake,’ yet many so called ‘news’ organizations reported them as fact.  The Clintons have never been encumbered with the truth, so by exaggerating the truth, they must take some responsibility for the growth of ‘fake news.’
Third, journalism has changed.  Fifty years ago, students of journalism were taught to equally present both sides of an argument.  They were told to keep their emotional attachment and opinions to themselves- as best they could- when reporting the news.  But that has changed.  Newspapers, broadcast media have little hard news because just presenting the facts and allowing the reader or viewer to make their own mind up is just too boring.  Modern journalism classes teach less about fairness and ethics and more about marketing your ideas.  Creative writing is the standard, not factual reporting.  Journalist fail to just report the story- they try to become part of the story.  They sensationalize and caricature facts to fit their values.  They ‘spin’ the story to fit their worldview.  To the unsuspecting reader, they believe they are getting a hard news story when in fact it is an opinion/editorial.  Journalism, as a profession, has only themselves to blame for the ‘fake news’ evolution.  There was a time the NY Times was the gold standard in reporting, but now they are nothing more than a public relations firm for liberal causes.  Conservatives flock to Fox News, Liberals to MSNBC and get fed what they want to hear, which is not just the facts, but spin- ‘fake news.’  The average American recognizes that and Donald Trump exposed the media.  In a recent poll, 77% of Americans- of all political persuasions-said they didn’t trust the media.  Sadly, there are few Jim Lehers left.
The U.S. Constitution guarantees the right of the free press.  Liberty of the press is critical in a free society.   Congress should keep their mitts off.  The answer to stopping ‘fake news’ is (1) journalism cleaning up their act and get back to reporting the facts and letting the public make up their mind, (2) full disclosure by all ‘reporters’ when they are expressing their opinion, (3) the public being more engaged in their culture and refusing to be gullible when fed ‘fake news.’
In the interest of full disclosure, this column is my opinion and is not presented as a ‘balanced’ news story, so it is in effect, ‘fake news.”
Posted by Steve Fair is a Jelly Salesman. at 11:26 AM