Oklahoma had a famous 'faithless' elector! 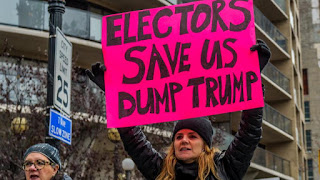 THE ELECTORS
By Steve Fair

On Monday, seven Oklahomans met at the State Capitol and cast their vote for Donald Trump.  They had lunch with the Governor, signed their certification of vote, took a few photos and went on their way.  These seven loyal citizens faithfully performed the duty they made a pledge to do.  They were Oklahoma’s presidential electors.  In America, we don’t directly elect a president/vice president.  We do it through the Electoral College.  When you cast your vote on November 8th, you were not voting for Hillary Clinton, Gary Johnson or Donald Trump.  You were voting for a slate of electors.  Each political Party selects Party loyalists as their electors.  They, in turn, are required by state law to vote for the person they swore to support- in this case, Donald Trump.  There is a penalty under Oklahoma law for violating the oath.  Those that violate that oath are called ‘faithless electors.’
Oklahoma had a famous ‘faithless’ elector in 1960.  Henry D. Irwin, a West Point graduate and Phillip Petroleum engineer, who was married to Frank Phillips granddaughter, said he couldn’t stand Richard Nixon and would not cast his electoral vote for him.  Irwin tried to convince the other 218 Republican electors across the country to violate their oath and vote for Senator Harry F. Byrd, a conservative Democrat from Virginia.  Irwin didn’t get too far in his mission and ultimately wound up voting for Byrd and Senator Barry Goldwater for Vice President.    Irwin and Phillips ultimately got a divorce and he famously became the first man to draw alimony in New York State.
Before 1960, presidential electors in Oklahoma were chosen in the primary election and ran statewide like other candidates.  Henry Irwin was unopposed in the July 2016 elector election.  In that same election, Oklahoma voters approved, by a 56-44% margin, to amend the state constitution and allow political Parties to select their own slate of electors.
The processes in which presidential electors are selected vary by Party.  The Oklahoma Republican Party elects one elector at each of the five congressional district conventions every four years.  The remaining two electors are elected at the state GOP convention the same year.  Oklahoma has a total of seven electors- the total number of congressman, plus our two U.S. Senators.    All seven electors are often well-known grassroots activists who have spent years being involved in Republican Party politics.  They take their oath seriously and would never consider violating it.  They understand they are simply a representative of the people and no matter their personal opinion of the nominee will vote as they have pledged.
This year, four Washington state electors, all Democrats, who were pledged to Hillary Clinton and Tim Kaine instead voted for Colin Powell and Faith Spotted Eagle.  Only one GOP elector, Texas elector Chris Suprun, who lives in Dallas, violated his oath and voted for Ohio Governor John Kasich   Suprun faces a fine if Texas Attorney General Ken Paxton decides to pursue charges.  Suprun, like Henry Irwin in 1960, just couldn’t bring himself to vote for the person he swore to vote for. In other words, Suprun’s word means nothing.
In the last couple of weeks, a group called Unite for America has been running television ads targeting the 307 Republican electors.  The group claims to be multi-partisan and the ads urged GOP electors to violate their oath, not vote for Trump and to ‘go down in the books as an American hero, who changed the course of history.’  They claim each elector has the ‘position, authority, and opportunity,’ to change their vote.  Martin Sheen, a militant Clinton supporter, is the first celebrity seen on the video.  The irony is this group claims to be for historic America values, which evidently includes lying and cheating to their way of thinking.  Presidential electors are not free agents, who can vote the way the want- they are legal representatives of the people and must vote the way they are bound.  To do otherwise is clearly a violation of ‘historic American values.’
Only one state, New Mexico, makes it a felony to violate your oath and go rogue.  It is time for Oklahoma to consider increasing the penalty for faithless electors.  While Oklahoma’s 2016 electors were faithful to perform their duty as pledged, there are too many Supruns and Irwins who think they know better than millions of voters.  Increasing the penalty will not eliminate the possibility of an outlaw elector, but it might make them think long and hard about violating their oath if they faced jail time in addition to a hefty fine.
Posted by Steve Fair is a Jelly Salesman. at 2:43 PM