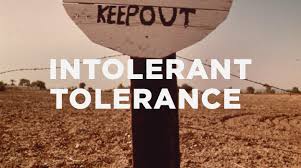 THE INTOLERANCE OF THE TOLERANT
by Steve Fair

2016 is almost in the books and it has been an interesting year.  Most news organizations rank the presidential election and the ultimate election of Donald Trump as the #1 news story for the year.  Trump’s election has created unprecedented angst among many liberals.  When President Obama was elected in 2008, many conservatives mourned, but the grief being expressed by the left over the election of Trump has been unbelievable.
The liberal New York Times wrote in a recent editorial: “2016 will enter history as a pivot that revealed the depth of the fears, alienation and frustration of our times, abruptly upending many of our assumptions about the future.”  The doom and gloom the liberal left has expressed since November 8th has been unreal.  Liberals have exhibited little tolerance for conservatives.
Many liberals preach tolerance, but fail to practice it.  The issue of intolerance for conservative ideas was recently addressed on MSNBC’s Morning Joe show.  Host, Joe Scarborough led a panel discussion on the lack of diversity of thought on most U.S. college campuses.    “You only have one out of ten professors that are Republicans or conservatives. You can’t understand the world if you don’t let it in behind your gates,” Scarborough said.   The panel was discussing an editorial in the New York Times written by Nicholas Kristof titled, “The Dangers of Echo Chambers on Campus.  Kristof, an admitted liberal, wrote about liberals: “We champion tolerance, except for conservatives and evangelical Christians. We want to be inclusive of people who don’t look like us — so long as they think like us.”  Kristof concludes that institutions of higher learning have become lazy by not presenting to students both sides of an issue.  They have failed to truly educate students on how the real world works and never present a conservative slant to any issue.  They have failed to develop critical thinking skills in modern students.  Most college campuses are nothing more than indoctrination centers, requiring students to simply regurgitate the liberal professor’s philosophy if they want to pass the course.
The fact is the U.S. Constitution guarantees freedom of speech and that includes freedom to hold conservative or liberal values.  Conservatives have the same constitutionally protected right to express their opinion as a liberal.  Liberals have championed the right of what they consider the ‘oppressed,’ but then oppress those that differ with their viewpoint.
A great example of the intolerance of the so called tolerant was a CEO in New Mexico who wrote his business clients after the election of Donald Trump and told them that he wouldn’t do business with any who had voted for Donald Trump.  He wanted his clients to declare their Party affiliation and if any were Republican, he would cease doing business with them.  He said he had a ‘moral obligation’ to take a stand.  In his letter, he branded Trump a racist and fascist.  Liberals rushed to the CEO’s defense and applauded his moral conviction.  Ironically the same liberals said the baker who would not bake a cake for a gay wedding because of his religious conviction didn’t have the right to discriminate. Such blatant hypocrisy doesn’t escape even the clear thinking liberal.
Most conservatives are confident enough in their worldview they welcome the open exchange of thought.  Many liberals agree.  While Senator Bernie Sanders is much too liberal for the vast majority of Americans, he is respected in the U.S. Senate for the way he expresses his argument and the respect he returns to those who disagree with him.   While asked what Republican in the Senate he considered to be his friend, Sanders citied Senator Jim Inhofe.  Two men could hardly be further apart on the issues, but they have learned to ‘agree to disagree’ in a spirit of respect.
How does academia retool their system of education and encourage students develop critical thinking skills?  They could mandate the hiring of more conservatives or encourage the free exchange of ideas in the classroom.  Certainly that would a great first step, but until the leaders of higher education recognize and respect that people with conservative values are critical to providing a balanced education experience for students, it will be nothing more than lip service.
Tolerance is defined as the ability or willingness to tolerate something, in particular the existence of opinions or behavior that one does not necessarily agree with.  Hopefully in 2017, both liberals and conservatives will not just preach tolerance for another’s ideas and opinions, but practice it.
Posted by Steve Fair is a Jelly Salesman. at 4:35 PM