Education leaders should be thinking outside the BOX! 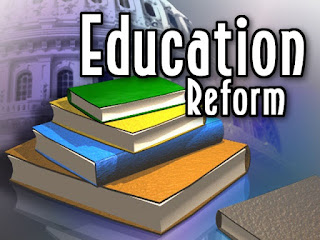 REFORM, NOT REVOLUTION!
by Steve Fair

On Saturday, U.S. Senator Elizabeth Warren, (D-MA) came to OKC.  Warren, a 1966 graduate of NW Classen High School, came back to her high school alma mater to keynote the Oklahoma chapter of the American Federation of Teachers(AFT).  Addressing several hundred educators in the cafeteria, Warren said: “You’ve got to pay for teachers, you’ve got to pay for builders, you’ve got to pay for books. And, money is about values. Are we going to decide that’s it’s just going to be all about billionaires and tax breaks for big corporations? Or are we going to say that everybody pays a fair share?”  National AFT President Randi Weingarten commended the teachers for the walkout in April.  "Protest is important, but it is step one. What we want, what our kids deserve is a revolution," Weingarten said.  Three observations;
First, Oklahoma government funds common education.  The money is just not getting to the classroom.  According to an Oklahoma Council of Public Affairs study, total revenues for Oklahoma public schools are at an all-time record high. Since 2006, school revenues have risen by more than $2.5 billion, or 41 percent, and now stand at over $8.8 billion- and it is before the latest round of revenue increases.  The problem is the money is not getting to the classroom where it makes a difference. If school administration in Oklahoma had grown as the same rate as student population over the past 20 plus years, and that money put into the classroom, Oklahoma teachers would be making $6,000 more annually.
Second, the average Oklahoman pays more than their ‘fair share’ of taxes.  Senator Warren suggests tapping billionaires to fund education, but there are not enough billionaires in the Sooner state to fund common education.  The numbers just will not work.  Hard working Oklahoma taxpayers, who can’t take off work and storm the Capitol demanding a pay raise, will pay the increased taxes.
Third, it is time for reform, not a revolution in education. Oklahoma kids deserve a change, but education leadership must commit to reducing administrative costs, pushing for merit based pay, and embracing technology before that reform happens.  Involvement in government/politics is a good thing, but it must be rooted in knowledge, not just zeal.
Seventy four licensed teachers ran for the Oklahoma legislature this year, many on the Republican ticket.  Many of the educators who ran on the GOP ticket- and won- are clearly not fiscal conservatives.  Their stated goal is to increase funding for common education by raising taxes.
In the preamble of the Oklahoma Republican Party platform, it states that revenues collected at all levels of government should be used only for well defined, legitimate government functions, and should be carried out efficiently so that tax rates may be kept as low as possible.  The platform also calls for audits of common education and merit pay.  How many of the licensed teachers running on the GOP ticket have read the platform?
Posted by Steve Fair is a Jelly Salesman. at 9:35 AM