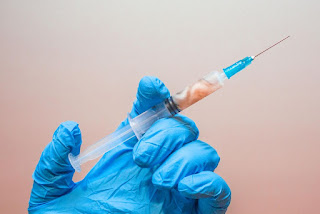 TAKE IT OR LEAVE IT!

The Holocaust aka the Shoah refers to the killing of over six million European Jews during WWII by Nazi Germany.  Approximately two thirds of Europe’s Jewish population was killed between 1941-45.  It remains one of the most brutal, depraved acts in human history.     In order to readily identify Jews, the Germans required them to wear a badge in the form of a yellow star of David.  The badges were printed on coarse yellow cloth and were a garish yellow.

Last week, the OKGOP Facebook page had a post comparing Oklahoma business owners who are requiring their employees to be vaccinated before they come back to work as being required to wear a yellow star.  A yellow star was photoshopped in the post to read ‘unvaccinated.’  The post encouraged readers to contact Lt. Governor Matt Pinnell and ask him to call a special legislative session to address private employer vaccine mandates.  Governor Kevin Stitt is out of the country and when he is not in the state, the Lt. Governor is the state’s top elected official.  The post has been commented on 2,500 times and shared 1,000 times.

Some took offense at the post.  Roberta Clark, the executive director of the Jewish Federation of Greater OKC said, “It’s sad and ironic that anyone would draw an analogy from one of the largest recorded genocides in the 20th century with public health attempts to save lives.”  In a combined statement, several elected officials; Governor Stitt, Lt. Governor Pinnell, Senators Inhofe and Lankford, Congressman Mullin and Oklahoma Senate President Pro Tempore Greg Treat said, “It is irresponsible and wrong to compare an effective vaccine- developed by President Trump’s Operation Warp Speed- to the horrors of the Holocaust.  People should have the liberty to choose if they take the vaccine, but we should never compare the unvaccinated to the victims of the Holocaust.”  Three observations:

Second, private business owners have a right to require employees to take the vaccine.  Republicans believe businesses should not face regulations/restrictions on their business.  If a business owner is trying to keep his business viable and believes mandatory vaccinations are necessary to accomplish that, it is their right to require it.  Businesses must be pragmatic.  They can be charitable, but they are not a charity.  If they don’t remain profitable, they don’t stay in business and in turn don’t create jobs.      Requiring employees to be vaccinated may put an employee in a tough situation.  If they feel that strongly about not being jabbed, they may have to find another job.

Third, there should not have been a comparison between the Holocaust and being unvaccinated.  The Jews in Europe were exterminated/murdered/slaughtered.  The worse the unvaccinated in Oklahoma would face is the possibility of losing their job.  That’s not the same.

Opinions vary on the vaccine.  Some believe the government is injecting poison into people.  Others believe the government is injecting a microchip that will be used in the future to track people.  Still others believe the vaccine is the solution to returning to a normal life.  Take the shot or not- it’s your choice.  But business owners should also have a choice.  They must be afforded autonomy, freedom and liberty to operate their business without government interference, to remain viable.  That is a fundamental Republican principle.

Posted by Steve Fair is a Jelly Salesman. at 5:47 PM