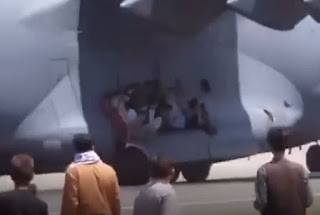 On Friday, White House press secretary Jen Psaki had a difficult news conference.  When asked about the criticism leveled by Rep. Susan Wild, (D-PA) of how the Biden administration botched the Afghan withdrawal, Psaki responded, “It is harder to be in the arena and make difficult decisions and the decision that a commander-in-chief has to make include among difficult options.

She also had a tense exchange with a reporter after stating President Biden only had two options regarding Afghanistan- (1) send tens of thousands of additional troops to Afghanistan or (2) to pull out and not put anyone at risk.  When the reporter challenged her and said another option was to pull out earlier- in May- and not to close Bagram Airfield last month, Psaki conceded no one anticipated the Afghan government would fold so quickly and that hindsight is always 20/20.  Three observations:

First, the withdrawal from Afghanistan has been a disaster.  It’s not just Republicans critical of how the POTUS has handled the Afghan evacuation.  U.S. Rep. Susan Wild, (D-PA) said, “This has been as far from orderly as it could possibly be.”  Rep. Joaquin Castro, (D-TX) said, “This administration should have been working a lot earlier to evacuate a lot of the people who are desperate to flee now. That’s a point that I think almost everybody agrees with, that these preparations, these evacuations should have started more urgently and earlier.”  President Biden disagreed and said in a Friday news conference, “I stand squarely behind my decision. After 20 years, I've learned the hard way that there was never a good time to withdraw U.S. forces.”

Second, why was Bagram Airfield closed last month before the withdrawal began?  Bagram was the largest U.S. military installation in Afghanistan.  During it’s twenty-year history controlled by the United States, Bagram provided a base of operations for the air support necessary to keep order in the country.

President Biden blames the Joint Chiefs of Staff for the base closure, but he (as Commander in Chief) sets the perimeters of what the military does.  General Milley, Chairman of the Joint Chiefs, said Biden told the military the primary task was to protect the US Embassy in Kabul.   With the limited number of personnel left in Afghanistan, keeping both Bagram open and protecting the Embassy were not possible.  It would have made sense to run the evacuation from a secure military installation (Bagram) instead of a civilian airport, which the Taliban controls.

Third, Biden’s promise to change America’s reputation in the world is coming true.  When running against Trump, Biden said he would ‘restore America’s image’ on the world stage.  He has certainly changed it.  Now the United States is seen as a country who will cut and run, bolt, abandon and skedaddle, leaving their American citizens and their friends to figure it out themselves.   It’s not likely the Taliban would have made their aggressive move if President Trump had been reelected.  They have taken advantage of weak, indecisive, irresolute leadership by President Biden.  Sadly, that void of leadership has cost thirteen Americans their life.  Psaki is right that leading is easier than critiquing, but during Trump’s presidency, Biden did plenty of appraisals of Trump’s decisions.  Now he is in the hot seat and continues his 40 plus year track record of being on the wrong side of foreign policy.