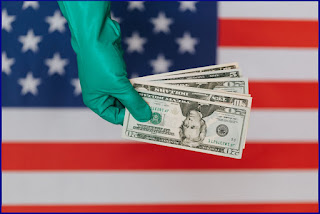 SPENDING SPREE ON THE WAY!

Oklahoma state government is getting $1.87 billion of the $350 billion from the American Rescue Plan Act(ARPA).  This is the spending bill signed back in March by President Biden.  In addition, the 77 counties in Oklahoma will spilt up $728 million.  Cities and towns in the Sooner state will divide up $553 million.  Just the ten largest cities will get to independently decide how to spend their portion of the windfall.  The state will decide how the money will be spent for the smaller towns.  The Indian tribes across the U.S. will spilt up $20 billion, but no decision on how that will be divided up has been made.

The states can’t use the money to fund pension plans, build up their reserve accounts, or finance debt.  ARPA can be used to support public health, provide premium pay for essential workers, or invest in water, sewer, and broadband infrastructure.   The governor must decide how to spend the money by the end of 2024 and ARPA monies must be spent by the end of 2026.  Three observations:

First, the spending of these monies will not go through the normal legislative appropriation process.  Governor Stitt has the sovereign decision on where to spend the monies so long as it meets the federal guidelines.  He has enlisted former Labor Commissioner Melissa Houston, the head of a political strategy company, to sort through all the applications for funding.  A 24-member joint legislative committee on Pandemic Relief Funding will develop a list of recommendations.  There are 12 members from the House and 12 from the Senate, 20 Republicans and 4 Democrats.   The committee recommendations will then be sent to another committee made up of 6 legislators and 5 executive brand officials.  That group will then compile a list for the governor to consider, but the final decision to fund or not to fund is ultimately the governors alone.

Second, the money should be spent on permanent long-term infrastructure.  ARPA should fund projects that last longer than a pair of socks.  Governor Stitt has publicly stated he wants to spend the money on strategic onetime investments that will benefit future generations.  That is a worthy objective and hopefully the vetting process will bear that out.

Third, ARPA monies are taxpayer dollars.  They don’t belong to the legislature, the vetters or the governor.  Every dime sent by the federal government to Oklahoma is tax money.  The government has no money.  It consumes- the private sector produces.  Some states have said they will use their ARPA monies to make tax cuts, which appear to be outside the federal guidelines.  The guidelines are broad and could allow cuts.  It doesn’t appear tax cuts for the average Oklahoman is on the table.  Perhaps it should be.

Including the ARPA, the federal government has spent $6 trillion dollars on pandemic relief- money American taxpayers didn’t have.  The national debt is now over $26 trillion dollars.   Leaders should be through and prudent in how they spend your tax dollars.  After all, your great great grandkids are paying for it.

Posted by Steve Fair is a Jelly Salesman. at 8:20 PM