GREATEST GENERATION BELIEVED IN A CAUSE GREATER THAN THEMSELVES! 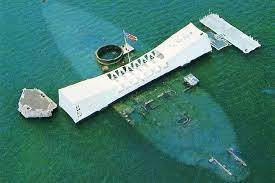 GREAT TO RELIANT IN 80 YEARS!

Tuesday December 7th will mark the 80th anniversary of the surprise attack on Pearl Harbor by the Japanese.  The United States was a neutral country at the time.  The attack led to America’s formal entry into World War II the next day.  The attack started on a Sunday morning at 7:48am and involved 353 Japanese aircraft, launched from 6 aircraft carriers.  There were 8 U.S. Navy battleships in the harbor.  All were damaged- 4 were sunk, including the USS Oklahoma. A total of 188 U.S. aircraft were destroyed.  2,403 Americans were killed and 1,178 were wounded.  There were 15 Congressional Medals of Honor, 51 Navy Crosses, and 53 Silver Stars awarded to the American servicemen who distinguished themselves in combat at Pearl Harbor.  The attack united America.  The call to ‘Remember Pearl Harbor,’ had men rushing to sign up to fight in the war.

The day after the attack, President Franklin Roosevelt delivered his famous ‘Day of Infamy’ speech to a Joint Session of Congress.  He called for a formal declaration of war on Japan.  The vote in the Senate was 82-0, the House 388-1.  The lone dissenter was Rep. Jeannette Rankin, a women’s rights suffragist advocate and lifelong pacifist from Montana.  Rankin was the first woman to hold federal office in the United States, elected to the U.S. House in 1916.  Three observations:

First, the attack backfired on the Japanese.  America and their leadership had remained neutral before the Pearl Harbor attack.  Britain was losing the war in Europe and while it was a great ally, America was staying out of it.  Sir Winston Churchill, British Prime Minister, said his first thought when America declared they were entering the fray was, “We have won the war.”   Japan attacked because they feared the US was going to intervene in their attacks in Asia, but history has shown that was not being considered.  Japanese Admiral Isoroku Yamamoto said, "I fear all we have done is to awaken a sleeping giant and fill him with a terrible resolve." The average Japanese citizen was shocked to find out about the attack and were dismayed they were at war with the United States.  Japan won the battle, but lost the war because they awoke that sleeping giant.

Second, those who fought WWII were a special bred.  Tom Brokaw wrote they were the ‘greatest generation.’ They were born between 1901-1927.  They had survived the economic depression of the 1930s where unemployment reached 30%.  They believed in personal responsibility, had a strong work ethic, were frugal, committed, displayed integrity and were self-sacrificing and self-reliant. They fought in WWII, not for fame or recognition, but because it was ‘the right thing to do.’  They put their country before themselves.

Third, if Pearl Harbor were attacked today, would Americans respond the way of their great grandparents?  It’s highly doubtful.  Many Americans, across all political spectrums, believe the country is so flawed, it isn’t worth fighting for.  Many of our best and brightest apologize for America’s past, don’t appreciate the sacrifice of their forefathers, and don’t understand our system of government.

The government of Afghanistan fell overnight because their citizens didn’t believe their country was worth fighting for.  Could that happen in America?  Americans in the 21st century are narcissistic, self-centered, spoiled individualists.  They want government to provide personal and financial security and exercise no personal responsibility.  They want free education, free rent and food, and free cell phones.  No way would they dare risk their life to fight a war they didn’t believe in.

Posted by Steve Fair is a Jelly Salesman. at 8:50 PM