Roe v. Wade could go down this week! 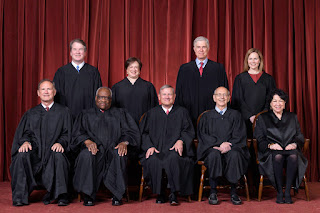 TIME TO RIGHT A WRONG!

On Wednesday, the United State Supreme Court(SCOTUS) will take up a Mississippi abortion case.  This could be the most critical decision on abortion in decades.  Lawyers for both sides are telling the SCOTUS there is no middle ground.  They can either affirm the constitutional right to an abortion or wipe Roe v. Wade out altogether.  With the addition of three SCOTUS justices to the court by former President Donald Trump during his four-year term, conservative thinkers have a 6-3 majority on the court.  Abortion advocates are worried.

The case is Dobbs v. Jackson Women’s Health Organization(JWHO).  It challenges a 2018 Mississippi law that bans most abortions after 15 weeks.  The law is in conflict with Roe v. Wade, the landmark 1973 ruling that declared a woman has a constitutional right to terminate a pregnancy in the first six months of a pregnancy.  Oklahoma, Mississippi and ten other states have abortion trigger laws that would take effect immediately if Roe v. Wade is overturned.  “A decision upholding this ban is tantamount to overruling Roe,” said Julie Rikelman, the lawyer for JWHO.  “There are no half measures here.” Sherif Girgis, a Notre Dame law professor and former clerk for Justice Alito says.   According to the liberal Guttmacher Institute a ruling affirming the Mississippi law would ban or severely restrict abortion in 26 U.S. states.   Three observations:

First, the U.S. Constitution does not guarantee the right to an abortion.  Justice Clarence Thomas has written the founding document is silent on the subject of abortion and said the SCOTUS bends its own rules and procedures to protect Roe v. Wade and the 1992 Planned Parenthood v. Casey rulings.  Few rulings by the SCOTUS have cried out as loudly for reversal, or both moral and legal grounds, as Roe v. Wade.  The majority opinion in Roe is fraught with conspicuous errors of law, fact and reasoning.  Justice Thomas said in 2019: “In my view, if the SCOTUS encounters a decision that is demonstrably erroneous- i.e., one that is not a permissible interpretation of the text-the SCOTUS should correct the error, regardless of whether other factors support overruling the precedent.”

Even supporters of Roe admit the problem with the ruling is it has little connection to the Constitutional right(privacy) it purportedly interpreted.  Most legal experts say it is a stretch to include abortion as a constitutionally protected right based on privacy and it has no foundation in constitutional text, history or precedent.

Third, an estimated 62 million children in the U.S. have been aborted since 1973.  The economic impact of abortion during that period is in the billions- both in lost workers and productivity, and in taxes not paid to government.  Planned Parenthood CEO Cecile Richards argues that there is no specific moment when life begins and says her children’s life began when they were born.  Dr. Jerome Lejeune, the father of modern genetics, disagrees.  He says, “To accept the fact that after fertilization has taken place, a new human has come into being is no longer a matter of taste or opinion—it is plain experimental evidence.  Each individual has a very neat beginning, at conception.”

The SCOTUS has the opportunity this week to right a 48-year-old wrong. Christians should be in prayer they will rule to uphold the Mississippi law.  It could save millions of unborn children’s lives.

Posted by Steve Fair is a Jelly Salesman. at 8:53 PM