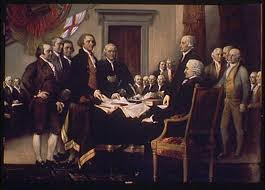 Independence Day is a national holiday, so most people will be off work.  They will spend time with family, eat hot dogs, watch parades, and pop fireworks.  The sad part is that many Americans don’t fully understand the importance of the Declaration of Independence in our country’s history.  Here are some facts about this founding document you may not be aware of.

Thomas Jefferson is often called the “author” of the Declaration of Independence, but he wasn’t the only person who contributed.  Jefferson was a member of a five-person committee appointed by the Continental Congress to write the Declaration. The committee included Jefferson, Benjamin Franklin, John Adams, Robert Livingston, and Roger Sherman.   Interestingly, Livingston never signed it. He believed that it was too soon to declare independence and therefore refused to sign.

Jefferson said that several authors influenced him in the writing of the document.  John Locke, an English physician and philosopher, whom Jefferson called one of "the three greatest men that have ever lived" was a major influence.   Most scholars trace the phrase, “life, liberty and the pursuit of happiness, to Locke's ‘theory of rights.’  There is no doubt the Magna Carta also influenced Jefferson.

Future President John Adams wrote the famous preamble-  When in the course of human events, it becomes necessary for one people to dissolve the political bands which have connected them with another….

There were fifty six(56) men who signed the Declaration, including two future presidents, three vice presidents, and ten members of the Congress. Nine of those signers died before the American Revolution ended in 1783.  The largest and most famous signature is that of John Hancock, President of the Continental Congress. The youngest signer was Edward Rutledge (age 26). Benjamin Franklin (age 70) was the oldest.

Twenty-four of the signers were lawyers and jurists, eleven were merchants and nine were farmers. They signed the Declaration of Independence knowing that the penalty would be death if they were captured.  At the time of the signing, the colonists were British subjects and they were rebelling against own government!  That may be why our founding fathers had a hatred for standing armies, and included the second amendment in the Constitution to insure private citizens could be armed.

What happened to the fifty six men who signed the Declaration of Independence?  Five signers were captured by the British as traitors, and tortured before they died. Twelve had their homes ransacked and burned. Two lost their sons in the revolutionary army, another had two sons captured. Nine of the fifty six fought and died from wounds or hardships of the revolutionary war.
The Declaration ends with these words; “And for the support of this Declaration, with a firm reliance on the protection of divine Providence, we mutually pledge to each other our Lives, our Fortunes and our sacred Honor.”

It’s not certain America today has leaders who are willing to pledge their life, fortune and honor to keep our country free.  Thank God for our founders.  They truly did give their all for liberty.  To read the Declaration, a mere 1,337 words, go to http://www.archives.gov/exhibits/charters/declaration_transcript.html

Posted by Steve Fair is a Jelly Salesman. at 9:15 AM

Thank you! I will be sharing this on the Logan County GOP Website.
Twana Blevins