America is a Republic with a clearly defined Chain of Command! 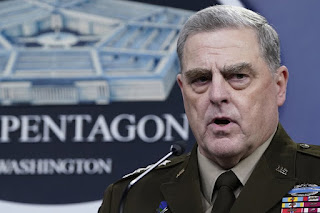 General Mark Milley, 63, is the current Chairman of the Joint Chiefs of Staff.  He has served in that capacity since 2019.  Milley was appointed by former President Donald Trump.  In their recent book, Peril, Bob Woodward and Robert Costa, claim Milley,  in a telephone conversation with Speaker of the House Nancy Pelsoi, agreed Trump was crazy.  Last week, he denied saying that.  While being questioned by the House Armed Services Committee, Milley was asked about two calls he made to his Chinese counterpart- one four days before the 2020 general election and the other two days after the January 6th Capitol breech.  During his testimony, Milley admitted he would give China a heads up if the US planned to launch an attack against them.   Three observations:

First, the role of the military in the United States is clearly defined.  According to Section 7062 of Title 10 of federal law the purpose of the military is to ‘preserve the peace and security providing for the defense of the United States, the commonwealths(states) and possessions and any areas occupied by the United States.  The military is overseen by the Joint Chiefs of Staff(JCS).  The Chairman of the Joint Chiefs of Staff is the principal military adviser to the President, Secretary of Defense, and the National Security Council (NSC), however, all JCS members are by law military advisers, and they may respond to a request or voluntarily submit, through the Chairman, advice or opinions to the President, the Secretary of Defense, or NSC.

Second, giving aid and comfort to the enemy is treason.  It is punishable by death or at the very least imprisonment of no less than five year and a fine of $10,000. Miley has admitted to giving America’s #1 enemy aid and comfort by calling his counterpart in China behind President Trump’s back.  At the very least, Milley should be removed as Chairman of the JCS and trialed for treason.

Third, the U.S. Constitution addresses presidential disability.  There is no provision for the Chairman of the JCS to unilaterally make that decision.  In 1965, the 25th amendment was added to the Constitution.  It mandates that a majority of the president’s cabinet (12 members) have to agree the president cannot perform the duties of the office before they are removed. Since the president selects their cabinet, getting that done is a high bar.  Milley allegedly told the other members of the Joint Chiefs to ignore Trump if he ordered an attack.  Milley does not have that option. In America, the military is to follow orders.  America is a Republic, not a military junta(a government led by a committee of military leaders).

Powerful leaders often are conceited and have big egos, but in our system of government, there is a clearly defined chain of authority.  Milley violated that chain.  C.S. Lewis said, “If a man thinks he is not conceited, he is very conceited indeed.” Milley’s actions need to be dealt with by Congress.

Posted by Steve Fair is a Jelly Salesman. at 1:37 PM